Any financial adviser will tell you it's better to own than to lease, but that pragmatism is ignored when it comes to cloud computing.

More and more companies pay cloud providers monthly subscription fees for instant access to the latest and greatest infrastructure, platforms and applications that they can't afford to buy outright. The market for leased IT platforms, applications and operations is so hot right now that companies can get just about anything as a service (XaaS) -- and they seek out those services with the hope of lowering IT expenses.

Nearly three quarters -- 73% -- of IT pros using public cloud services listed cost savings as the primary reason, according to a 2012 TechTarget survey of 1,500 IT professionals.

But cloud services may end up costing far more than on-premises IT over the long term -- and that's exactly why vendors create cloud versions of their wares. Software as a Service (SaaS) gives vendors a reliable revenue stream that they don't get with their biennial software product releases.

"If you believe the marketing literature, you think that you should be moving everything to the cloud tomorrow," said Sean McDermott, CEO of Windward IT Solutions, an IT service provider based in Washington, D.C. "That's not the case … there are a lot of factors to consider."

For mature companies with a lot of cross-system integration, the question of what to put in the cloud is a complex one, and the answer often leads back to their own data center.

Windward IT Solutions considered moving its Office and SharePoint environment to the cloud, where it already runs email via hosted Exchange. But certain applications, such as its customized accounting software, can't be integrated with the cloud-based version of Exchange, McDermott said.

Add to that the ongoing subscription cost of about $9 per user per month for hosted Exchange via a cloud service provider, plus Exchange ActiveSync costs, and for about 120 people, that amounts to $1,600 per month, or $19,200 per year, he said.

"I have to buy a server that I need for accounting software and some other things anyway, so in this case, in terms of Capex and Opex, it makes sense to build our own private cloud," McDermott said.

Microsoft, which charges $8 per user per month to host its Exchange Online service, said it does not have any data comparing the total cost of owning on-premises Exchange servers with using cloud-based Exchange Online. The company also declined to offer an Exchange Online customer to discuss the topic.

Instead, a spokesperson directed us to a January 2013 case study of a West Coast nonprofit that migrated from an old version of Exchange Server to Exchange Online, Microsoft Office 365, Lync and SharePoint Online to avoid about $40,000 in Capex costs for equipment and software upgrades. The organization now pays $1,500 a month, according to Microsoft's study.

Some simple math will tell you that in just over two years, their $1,500 monthly payment amounts to the $40,000 capital expense they wanted to avoid. 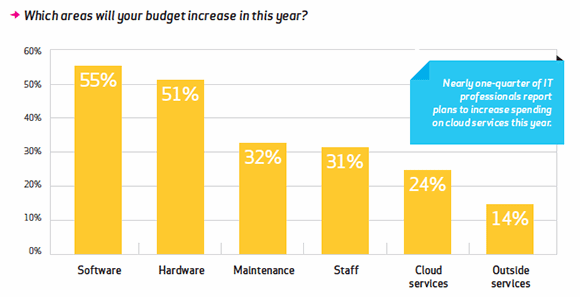 That's not to say cloud services are never worth the price; the benefits of not having to invest in a product up front and avoiding all the expenses that go along with maintaining and managing it are what make it worth using, according to Carl Brooks, an analyst at Tier 1 Research.

"You're going to pay the same amount to Oracle and roughly the same amount in operating costs to AWS [Amazon Web Services] as you do inside the data center," Brooks said. "So the reason an IT shop uses cloud services isn't to save money, but because there's some other inherent advantages to using it."

This applies across the board to all external services and is actually the reason enterprises spend the most money -- about 7% to 8% -- with managed services providers, 1% to 2% on Infrastructure as a Service and 2% to 3% on SaaS, Brooks said.

"It's all about pushing actual work off the IT guy's plate into the service provider," Brooks said. "The other 90% of the budget still goes to all the usual stuff: salary, software, existing data center."

Let us know what you think. Write to us at [email protected]

Planning for the cost of cloud computing