With the latest sequel to its backup and replication software, Nakivo has added support for Microsoft SQL Server and more streamlined management, as it maintains a pace of releasing a product every quarter.

“If you don’t truncate them, they will fill up all your space and maybe crash your server,” Serdyuk said.

The product’s new dashboard displays jobs in a calendar view. Serdyuk claims the feature will especially help Nakivo’s customers with large workloads, such as one customer who he said has 5,000 VMs, which translates to lots of backup jobs.

“Managing those is quite challenging,” Serdyuk said.

The dashboard displays the predicted duration of each job in the calendar view. If a user spots a free time slot, it’s easy to schedule a new job, Serdyuk said.

In a related addition, customers can add multiple schedules for a single job, so it can run at different times. For example, a job could run at night on weekdays and during the day on weekends. 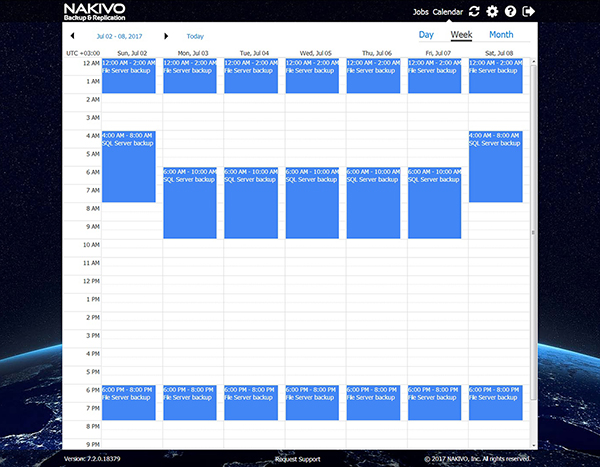 “A surprising number of products can’t do that,” said George Crump, founder and president of IT analyst firm Storage Switzerland.

In addition, Nakivo Backup & Replication 7.2 can be installed on Asustor NAS, extending previous support of QNAP, Synology and Western Digital NAS. Customers can essentially create their own VM backup appliance with hardware, software and storage.

“You get an additional layer of protection,” Serdyuk said.

Beta signup is open for Nakivo Backup & Replication 7.2 and the product is expected to be generally available in the third quarter, likely near the end of July. In the second quarter this year, Nakivo launched 7.1, which provided support for Hyper-V failover clusters. Version 7 debuted earlier in the year.

Serdyuk said the company likes to develop features and get them right to users rather than waiting to launch on an annual basis. Nakivo has settled in to a schedule of one release per quarter.

Crump said he likes the strategy, as releasing dozens or hundreds of features at once — like Apple has done, for example — can be overwhelming for the customer. When a vendor unveils a handful of features, a customer can better see which ones apply. If the calendar view, for example, had been part of a bigger launch of features, Crump said he may have missed it.

“The pressure is on Nakivo to be able to keep that pace up,” Crump said.

Crump is still looking for Nakivo to add physical support. Even though virtualization continues to increase, there are still going to be environments — such as SQL — that don’t get virtualized, he said.

Serdyuk said Nakivo is developing a search tool that could find items by job name, VM name and backup name. In addition, the vendor is working on native tape support, a service that customers have requested and another item Crump listed as one he’d like to see in Nakivo Backup & Replication. In some industries, tape storage is a requirement.

Founded in 2012, Nakivo is located in Campbell, Calif., and claims 10,000 customers around the world and more than 1,800 channel partners.