This is the ninth article in a series on the basics of VMware View.

One of the most important VMware View components is the Connection Server, because it ensures that users are connected to their virtual desktop.

It's important to understand the limits of what a replica server can deliver. Replica servers are intended to offer high availability, not fault tolerance. Once a user is actively connected to a VMware View Connection Server, if it becomes unavailable – the sessions it is holding do not magically get moved to the replica. 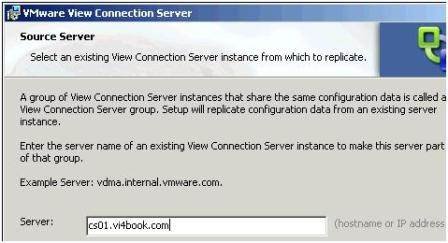 If the install has been successful you will see the replica listed under View Servers in the Configuration Page of the web-administration pages (Figure 2). Additionally, you should be able to load the View Client and configure it for the replica and still receive the same desktop list.

Install a Security Server
Despite the fact that VMware View Connection Servers offer an encrypted certificates-based SSL Tunnel from the client to the virtual desktop, they are not appropriate for being patched to a DMZ. This is for two reasons:

As an answer to the problem, VMware View has the Security Server – it can be left in a workgroup and does not require domain access. It only responds to 443 requests and allows the firewall administrator to only open (inbound) secure ports to the external firewall.

Given the Security Servers special role in the DMZ – you might find the name resolution fails for you. You can always use hosts files or an IP address to complete the dialog box.

Load balance Security Servers (Microsoft NLB)
There are many options for load balancing your VMware View environment. Ideally, whatever solution you use it should be load balancing (as you might expect) but also be able to detect when nodes in the cluster become unavailable. Load balancers vary in quality and some do not handle this second requirement very efficiently.

Hercules is an IP based load-balancer which runs as a virtual appliance and is free to download from VMware's Market Place. I first came across this system from teaching the old VMware Virtual Desktop Manager course – where we used it in the student labs. It does the job and simplifies the end-user connection as they only need to connect to one IP address. True load-balancing appliances which are either physical or virtual are likely to come in pairs to prevent them becoming a single point of failure but respond to one single IP address. You can download Hercules here.

The default login is root and the password is root – and you will have to use the Linux text editor Vi to edit the /etc/network/interfaces file to modify its IP address. Once you have set the IP address of Hercules, you can use its PEN command to set the two Security Servers, and it will load-balance like so:

Alternatively, a cost-effective solution is to use Microsoft Network Load-Balancing to create an NLB cluster of two or more Security Servers. Microsoft NLB is relatively easy to set up, and whilst it does handle load-balancing successfully, I've found it somewhat lacking in detecting whether one of the nodes in the NLB cluster has gone down. It doesn't seem to have much awareness of the IP dependencies between the various components between the systems.

The more I have investigated these options the more I think how simpler life would be if I only had one Security Server and Connection Server – and they were protected by VMware Fault-Tolerance. However, the one thing that stops this configuration is patch management and upgrades. If you only have one VMware View Connection server and Security server it then becomes impossible to take down one of the roles to carry out maintenance of the server.

What follows is very much a "Getting Started" guide to Microsoft NLB; it will not cover every single option or setting. My intention here is merely to show you an example of a load balancing system and how it affects the configuration of the Security Server.

Configure the Security Servers for Internet Access
Before you enable Microsoft NLB (or any load-balancing system) it's important to create a special configuration file called "locked.properties" for each Security Server. The locked.properties file has two main purposes – to hold the external or "internet" FQDN for connections to the Security Servers and the TCP port number. In my scenario the true identities of my Security Servers and Connection Servers will never been known to my end-users. My users will log on to a URL called virtualdesktops.vi4book.com using port 443, the IP address for virtualdesktops.vi4book.com will be a public IP valid for the multicast IP for the internet in the 193.x.x.x range – and it will be the Microsoft NLB clusters' job to respond to this IP address. Without the locked.properties file on each Security Server they would return their FQDNs which is undesirable and will be inaccessible directly because they will be using internal IP addresses in the 192.168.2.x range.

The locked.properties file can be created by hand using a text editor, from VMware View 3 onwards there is now a webpage that you can use to list your VMware View Security Servers, specify their settings and download a .properties file. I prefer this method because it validates your entries – and prevents typos. As you've probably guessed from reading this book I'm not the best typist in the world. I could give you a complete history about how mild dyslexia initially inhibited my success in my teenage years in the mid-80s until I discovered word-processors and auto-correct – but I will spare you the sob story!

Anyway, once the locked.properties file has been created you will need to restart the VMware Security Service to make sure it is effective.

Important
Before you head off to set up the Microsoft NLB Cluster, you can do a couple of checks at each Security Server, shown in Figure 8. Firstly, can they ping each other by FQDN name? Secondly, can you run an nslookup test on the public FQDN and receive a positive response?

In the screen grab above I have edited the image to not reveal the actual IP address which is the result. Successful responses to both of these questions will make the set up of Microsoft NLB easier.

Enable NLB clustering for Security Servers
Microsoft NLB comes in two formats, a unicast and multicast method. I would strongly urge you to use multicast as the method, for two main reasons. A unicast Microsoft NLB is incompatible with VMotion whereas multicast is compatible. If you are forced to use a unicast address you will have to modify the "Notify Switches" setting on the properties of a port group or vSwitch.

So for this configuration to work you will need to install the "Reliable Multicast Protocol," shown in Figure 9, for the Local Area Connection of each Security Server in the Microsoft NLB Cluster. 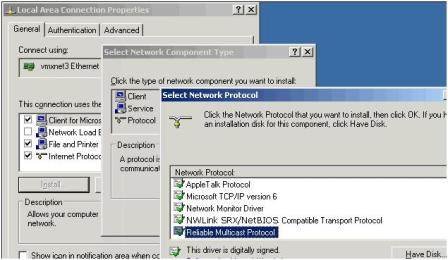 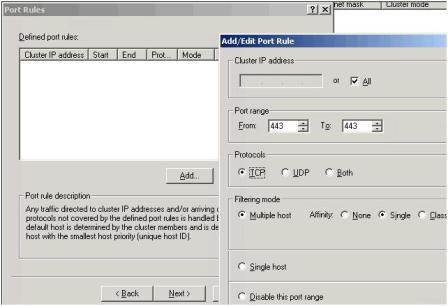 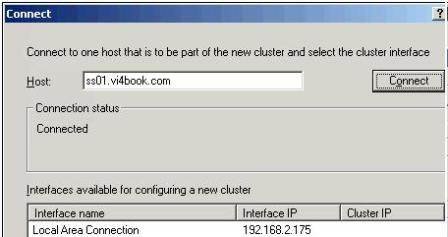 During this initial setup phase you can only add one server to the cluster. This server then builds the cluster which then allows other servers to be added to the cluster once it has completed its tasks. 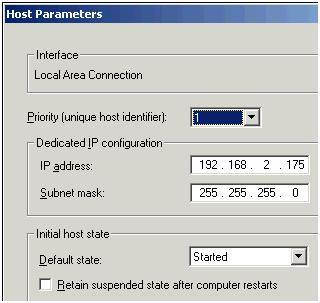 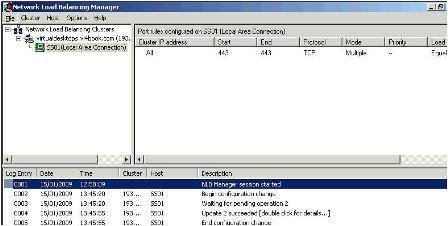 Test the load-balanced configuration
Before you crank-up a VMware View Client and try to login to the VMware View "NLB Cluster", first confirm that the client can resolve the external/internet FQDN to the correct address – in my case virtualdesktops.vi4book.com to my 193.x.x.x/23 address. My ISP does allow ICMP packets (which surprised me) so I can even ping my cluster from the internet because my hosting provider allows ICMP packets as well (which surprised me even more!)

In my case I had to manually set the appropriate gateway settings on the properties of the Local Area Connection of Security Server for this to work. Additionally, I had to adjust the metrics for my gateways (because I have more than one) to set the external/internet based gateway address to be the preferred one, shown in Figure 17. 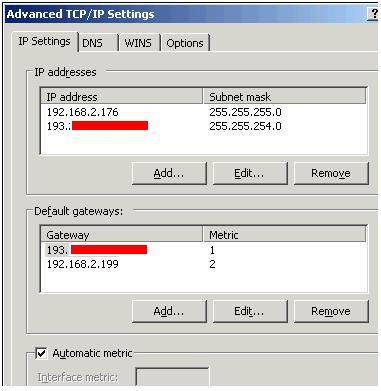 VMware has a document that describes in more detail your options for load-balancing. Although this document was originally written for VMware Virtual Desktop Manager 2, the load-balancing technologies sit independently of the broker and therefore should work for any broker. Additionally, VMware View 3 is the "new name" for VMware Virtual Desktop Manager – and they share the same historical code base.

GETTING STARTED WITH VMWARE VIEW

ABOUT THE AUTHOR:
Mike Laverick is a professional instructor with 15 years experience in technologies such as Novell, Windows and Citrix, and he has been involved with the VMware community since 2003. Laverick is a VMware forum moderator and member of the London VMware User Group Steering Committee. In addition to teaching, Laverick is the owner and author of the virtualization website and blog RTFM Education, where he publishes free guides and utilities aimed at VMware ESX/VirtualCenter users. In 2009, Laverick received the VMware vExpert award and helped found the Irish and Scottish user groups. Laverick has had books published on VMware Virtual Infrastructure 3, VMware vSphere4 and VMware Site Recovery Manager.