Object-oriented languages such as Java have formulated the ground rules for how developers generally handle data in complex software and web apps. More specifically, object-oriented programming offers a development model that enables programmers to handle and organize that data as objects rather than blocks of code and logic.

The object-oriented programming (OOP) approach allows developers to bind and manipulate data using exclusive functions. These functions cover a range of operations, including code reuse and variable designation. Programmers can then establish procedural code that governs data accessibility and makes it easy to add new functionality as applications and software architectures evolve over time.

In this article, we'll go over the basic components of object-oriented programming, review the four major principles of OOP, and explore how these concepts are embodied in programming languages like Java.

Adopting object-orientated programming starts with learning to clearly identify objects and define their relationships through data modeling and class designations. This requires developers to understand the following three main components of OOP:

Let's look at an example of how these components interact. In Java, class designation instructs the Java virtual machine (JVM) environment to build an object. Using a single class definition, a programmer can build multiple objects into a software program. This allows for faster parallel development, modular class reuse and a higher degree of maintainability.

Object-oriented programming is better defined as a set of guiding concepts than as a technical method. Specifically, there are four overarching OOP principles:

Developers can simultaneously reuse common logic among unique objects, but only if they assign hierarchic relationships and subclasses to those objects. If a particular class is able to inherit fields and methods from a superior class, programmers can better manage the integration of all the objects involved.

Class inheritance moves from the top of the hierarchy down, with the top made up of superclasses (also called parent classes). A superclass can maintain any number of subclasses, but a single subclass should never associate with more than one superclass.

Polymorphism means that objects can adopt more than one form, depending on their context. The application should then be able to independently recognize the correct form and execute the code and run the object's associated methods. This creates clear boundaries between entities that share same name with signatures and declarations, and is the key OOP mechanism that allows components to share behavior.

It's worth noting that polymorphism takes two unique forms in Java coding:

When developers want to create a new class, but an existing class already contains the desired code, they can derive a new class from the old one. In OOP, these modular classes enable developers to reuse those classes in other applications and projects.

This reusability opens the door for programmers to perform fixed sets of operations on particular objects, and then add functionality as the application and codebase evolves. However, improper use of inheritance, such as leaving unused data in base classes, can lead to memory mismanagement and application failures.

Encapsulation represents the mechanism for code to bind with the data it manipulates. This provides a shield that protects data from being accessed by any external code existing outside this shield. When that data is hidden, only a declared function within that class can access the variables or data. This will both prevent unauthorized objects, as well as contain failures that would otherwise spread to other components.

Java embodies the best qualities of OOP, namely since it is defined as a "write once, run anywhere" language. Programmers can achieve high reusability from Java code, especially since the code can essentially run on any device or platform through the JVM interpreter. Once compiled, Java programs are converted into bytecode, which can be recompiled at each particular system platform.

For example, Java programmers can make it easier to maintain procedural code through basic OOP concepts. Since the language encourages a centralized code base, developers can quickly and easily access that data during upgrades. This centralization also improves programming security, since Java requires high levels of validation. 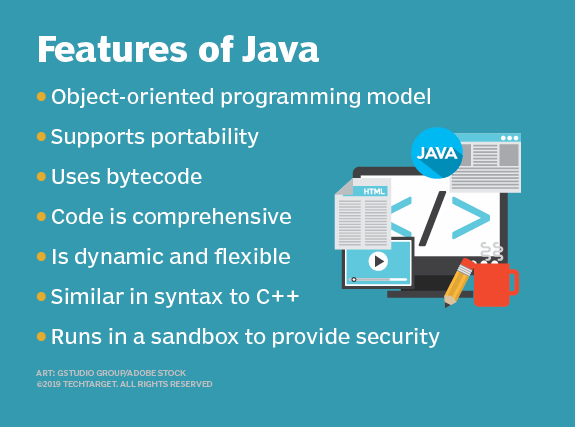 Finally, Java employs data abstractions that present only the essential details of an object to a particular user. By noting the properties and behaviors of objects, Java programmers can delineate similar types of objects from one another, and then implement interfaces and abstract classes. This leads to a situation where only the relevant operations will interact with certain data types.