Enabling WinRM
In order to run PowerShell commands against remote desktops, the Windows Remote Management (WS-Management) service must be running on your computer. This service has a default startup type of Manual, so you will have to set the startup to Automatic and then start the service. You can verify that the service is running by opening PowerShell and entering the following command:

There is some prep work that must be done on the computers you want to manage. The first thing to do is install Internet Information Service (IIS) on all of the desktops that you want to manage. You can do this by opening the Control Panel and clicking on Programs followed by Turn Windows Features On or Off. On the following screen, select Internet Information Services and click OK. 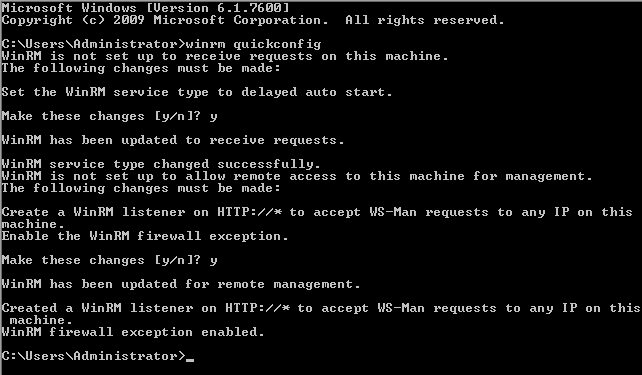 Figure A: The WinRM QuickConfig configures the WinRM listener on the remote PC. (Click to enlarge)

This command automatically configures the startup type for the WinRM service, enables firewall exceptions and sets up the WinRM listener. As you can see in Figure A, you will be prompted to confirm each action.

Testing Remote PowerShell
The easiest way to test your ability to run PowerShell commands against a remote Windows 7 PC is by running a command to return the computer name, using the following command:

If you want to run the same command against a remote computer, you would use this command:

Figure B: This command returns the remote computer's name. (Click to enlarge)

This technique is useful if you only need to run a single command. If you need to run a series of commands, you are better off using the New-PSSession cmdlet.

One more thing you need to know about the technique that I showed you is that it can be used to run a command against multiple remote computers. All you have to do is specify all the computer names that you want to run the command against. Computer names should be separated with a space.

Remote PowerShell pitfalls
As I said at the beginning of this article, a lot can go wrong when you attempt to use PowerShell for remote desktops. When I was writing this article, the WinRM QuickConfig command would lock up and eventually error out. It was only after six hours of troubleshooting that I discovered that my antivirus software was blocking access to remote PowerShell.

Another thing to check is that the local computer must be able to resolve the remote computer's IP address. If DNS resolution isn't working properly, you can specify an IP address within the command rather than a computer name.

Firewalls can also cause WinRM to fail. The firewall must be able to accept inbound and outbound HTTP traffic. The WinRM QuickConfig command enables exceptions in the Windows Firewall, but you have to manually configure firewall exceptions if you are using a third-party firewall. It is worth noting that WinRM 1.1 and earlier versions used TCP Port 80. However, WinRM 2.0 (which is the version used by Windows 7) uses port 5985 instead.

As you can see, it can take a bit of tinkering in order to be able to run PowerShell commands against a remote desktop. Even so, the process is very smooth once the system is properly configured.

ABOUT THE AUTHOR:
Brien M. Posey, MCSE, is a Microsoft Most Valuable Professional for his work with Windows 2000 Server and IIS. He has served as CIO for a nationwide chain of hospitals and was once in charge of IT security for Fort Knox. As a freelance technical writer, he has written for Microsoft, TechTarget, CNET, ZDNet, MSD2D, Relevant Technologies and other technology companies.