Early adopters of BYOD have learned that there is a hit on network resources as the number of devices increase.

Imagine a 60-foot square space (3,600 sq. ft.) that holds 36 offices, each 10 feet by 10 feet. If employees only have one device each, that is 36 devices, which a single wireless access point (WAP) may be able to handle. But if the number of devices increases to 3.3 per user as a recent Cisco survey predicts, we now have just under 119 devices. Unless the employees are largely transient and rarely in the office, a single WAP cannot service all those devices.

A ballooning number of devices results in not having enough slices or available attachments for communication. For instance, if someone is attached to an access point that is at the far end of the office, he could be knocked off by someone attaching at a location closer to the access point. Many WAP vendors advertise higher theoretical limits, but in general most WAPs support only 15 to 20 devices with any level of usable speed.

As WAPs become congested, new WAPs need to be added upstream, which increases the number of needed uplink switch ports and may increase the number of backbone connections and the speed at which they operate. For instance, 12 access points will take 12 network connections. Moving to 25 access points increases the need to 25 connections and perhaps a new switch. As each switch needs to connect to the communications core, additional uplink ports may be required (see Figure 1). 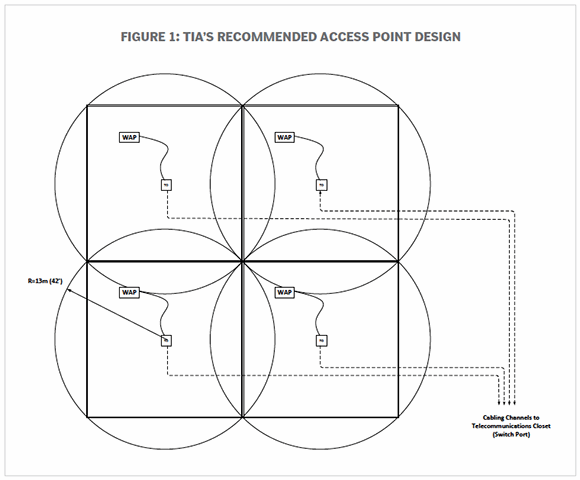 The Telecommunications Industry Association (TIA) released a Technical Service Bulletin (TSB) to suggest ways to cable access points in a network. TIA TSB-162 suggests a telecommunications outlet in the center of every 13 meter block on a grid (see Figure 1). This allows the access point to be tuned to the environment, moving the access point as needed to avoid sources of interference. Many wireless deployments, however, have one cord for one WAP -- in each conference room, for example -- leaving large dead spots around the remainder of the office space.

Adding WAPs around the office may or may not be easy to accomplish. In the case where only a few were installed in conference rooms, adding capacity in the remainder of the office may not be that bad. But if you've already installed several access points, adding incremental WAPs may be more difficult.

Consider the grid above. While this methodology allows an access point to be installed in the center of each 60 foot grid with up to a 13-meter (42-foot) patch cord, there can be interference within each grid section. Multipath signals -- bouncing off people, walls and other signals -- can be a real problem.

Choosing different channels for each WAP can help in those situations. Also, you need to determine direction and strength of antennas in the space.

Upgrading older access points to the newer IEEE 802.11n standard or even IEEE 802.11ac, once it is ratified as a standard, can help boost speed. Most WAPs on the market today have mixed 802.11 b/g and n.

An issue with some models is that if an 802.11g device attaches to an 802.11n access point, all devices negotiate to the lower 802.11g speed. This "feature" can rear its ugly head when older consumer devices enter the network, effectively slowing everyone down. A quick check from the manufacturer will let you know.

The newer 802.11ac will have distinct advantages in that it can use beamforming to "beam" the signal to a single device rather than flooding a room. While this was available in previous 802.11 standards, there was no single way of doing it, making end-to-end beamforming proprietary and difficult at best.

The 802.11ac standard will provide stronger signals and a single method of beamforming. It will also provide multiple channel bonding and increased streams from four to eight, allowing much better control over bandwidth consumption

Assuming you have built out the network to support all devices, you need to control the bandwidth consumption of various devices, apps and protocols. A single YouTube video at just average resolution can take up one-third of a T1 circuit.

Users' smartphones with high-definition cameras can create many large video and photo files. Backing those files up to a server or the cloud can put a strain on the network. Downloads and upgrades from the app stores and operating system upgrades will also draw on resources. In addition, cloud-based apps with mobile clients consume resources.

Then there are other bandwidth hogs on corporate networks that we didn't even think about a few years ago, such as Skype, FaceTime and gaming. It can be tempting to restrict access to these outlets outside of work hours, but as more companies embrace social media outlets, that will be harder to do.

Controlling which IP ports and applications can pass packets on the network is another way to limit bandwidth consumption, but as data stores get larger, that may not be enough. Already, many services such as on-plane, in-air Wi-Fi restrict video streaming and calls.

A smarter move may be to partition corporate and private data networks. It is difficult to tell whether or not a backup is work-related. By splitting networks, workers can attach only to public shared Wi-Fi with their personal devices, while corporate-supported devices can connect to corporate networks.

For networking, shorter DHCP leases may be needed when there is a highly transient workforce. It may also be necessary to control which brands of devices have access. Having a short list of supported equipment can also relieve some burdens on IT staffers as to what devices they need to support. There are device managers on the market that will recognize MAC manufacturer control information and deny access based on brand.

When it comes to BYOD planning, it's all about control. We need to control the number and type of devices, and we need to manage bandwidth. It is difficult to control unbound wireless devices, but failure to do so will doom your BYOD initiative to failure.