Virtualizing servers in the data center has been a trend for years, but virtual desktops have been slow to catch on. VMware View is VMware's entry in the virtual desktop space which competes with the other major players, namely Citrix XenDesktop and Microsoft Remote Desktop.

Virtual desktops provide several advantages over traditional full workstations including easier management and simpler provisioning. Desktop virtualization takes a user's desktop workstation and stores it on a central server as a virtual machine. The user can then access it from anywhere using a small remote client application, which is referred to as a thin client. Thin clients can be either low-cost dedicated hardware devices that are basically just a monitor, keyboard and mouse, or an application installed on any type of PC. Because the desktop is hosted on a powerful server that handles all the processing for the desktop, the thin client has very small resource requirements and does not need to be that powerful. The only data that is sent back and forth between the thin client and the hosted server are video, keyboard/mouse inputs and peripheral connections (USB drives/printers).

VMware View leverages vSphere as the virtual desktop host platform; in other words, user desktops are virtual machines running on ESX/ESXi hosts. They can take full advantage of all the features built into vSphere like VMotion, snapshots, Distributed Resource Scheduler (DRS) and more.

View uses a special protocol to send data back and forth between the thin client and the hosted virtual machine. The Microsoft Remote Desktop Protocol (RDP) has been the protocol that has been used by View, but a new higher-performing protocol called PC over IP (PCoIP) was recently introduced with View version 4. PCoIP is intended to overcome some of the limitations that RDP experienced with high-resolution desktops and complex graphics situations. PCoIP enables View to deliver a much smoother experience to end users and is able to handle streaming video, high-definition audio and high resolution graphics. The RDP protocol is still available in View and can be used for lower-demand situations and lower-bandwidth connections between the thin client and the hosted virtual machines.

To recap, VMware View virtual desktops run on a thin client that uses either a RDP or PCoIP protocol to connect to a virtual machine (View Desktop) running on an ESX/ESXi host. There, are, however, additional components used to manage the connection, provisioning, authentication and applications.

The below image depicts the components of VMware View; let's briefly cover each one. 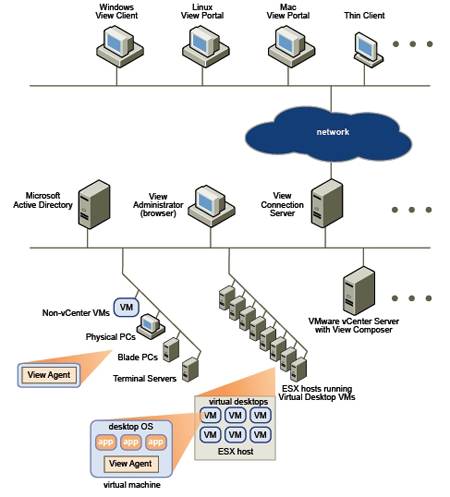 That wraps up the basics of how VMware View works. Virtual desktops offer some great advantages over traditional desktops and are gaining in popularity. As more and more companies deploy server virtualization in their data centers and see the benefits of virtualization in general, they will naturally look to extend that to their user desktops.