called Server Manager. With a full screen. After every boot. While Server Manager does take a little getting used, it can be a valuable tool once you figure out where to find everything.

The following is a list of common administrative tasks and where to find them in Windows Server Manager. Figure 1 shows the primary features of Server Manager. Note that all of the applications and components formerly found under Add/Remove Programs in the Control Panel are now in Server Manager as either a role or feature. Also note that the standard snaps for the roles installed on this machine -- domain services and DNS -- are included in the Windows Server Manager Console. 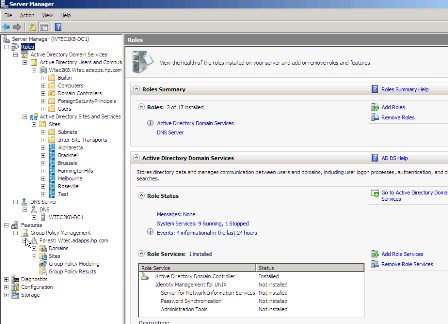 Under Diagnostics, there are three items: Event Viewer, Reliability and Performance (which used to be Performance Monitor) and Device Manager.

Event Viewer
There are a lot of event logs now with Windows Server 2008, and you can even customize your own. Note in Figure 2 under Event Viewer that we see Custom Views, Windows Logs, Applications and Services Logs and Subscriptions. 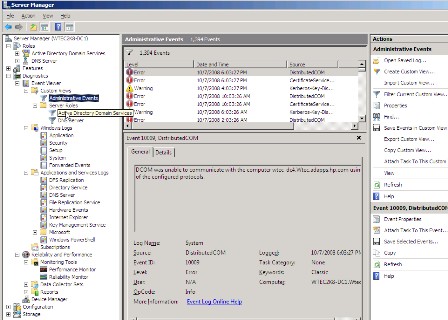 Custom Views allow you to build your own event log. The figure above displays the Administrative Events log. This identifies several standard Windows logs from which we can cull important events, such as warnings and errors, but not informational events. Also under Custom Views is the Server Roles folder, where we have the Active Directory Domain Services (the old Directory Services log) and DNS server logs. You can also add more as you install more roles.

Note: Windows logs are basically the standard logs most administrators are familiar with from Windows 2000 Server and Windows Server 2003.

The Applications and Services logs contain a variety of logs by default as seen in Figure 2, such as Distributed File Service Replication (DFSR), Directory Service, File Replication Service (FRS), Internet Explorer, Windows PowerShell and others.

The Subscriptions node lets you set up event forwarding to collect events from a number of servers on this machine.

For Event Viewer, It is important to note that in addition to the options here (including the customizable event logs), each role -- as viewed in the Roles section of Windows Server Manager -- will contain its own specific event logs. Figure 3 shows the result of clicking in the Active Directory Domain Services role icon in the left-side pane. It displays the Directory Services-related events from the last 24 hours and all related system services. Further down the screen (though not visible in the figure) is a section of links to Active Directory-related tools. Note in the right-hand pane that you can "Go to Event Viewer", and take advantage of other options such as filtering and hiding events and changing properties. 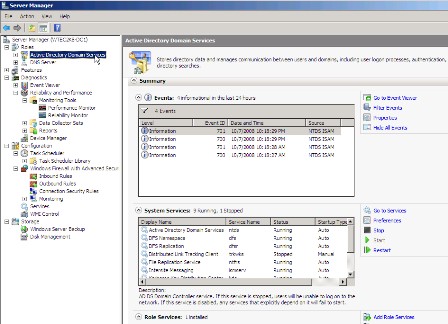 Reliability and performance
This section contains Windows Server 2008's new iteration of Performance Monitor, as well as the new Reliability Monitor. You can customize your own data collector sets, which works as sort of a library of counters you can use to collect PerfMon data, as well as custom reports that can be created. This is a very interesting and powerful feature in Windows Server 2008. Check out this article for more information on the Reliability and Performance Monitor.

Under the Configuration icon are the Task Scheduler, Windows Firewall, Services and Windows Management Instrumentation (WMI) control options, as shown in Figure 4. There are some nifty features in the Task Scheduler, including the ability to create a library for and monitor tasks. The Windows Firewall, if you use it, is easily configurable here along with the common Services listing, which looks like the old Services snap-in. 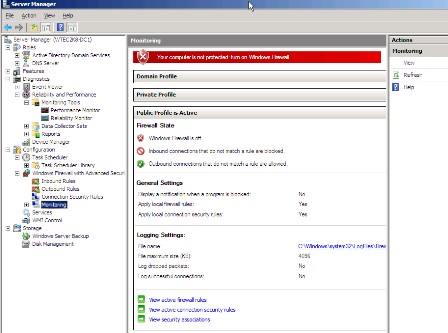 Well, that's the whirlwind tour of Server Manager for Windows 2008. It really has some great features, and Microsoft has done a good job of collecting them in one tool. You are no longer forced to deal with a million different snap-ins in order to manage various parts of your environment. Just remember that if you need a tool, component or standard Windows application installed, do it through Server Manager's Roles and Features wizards.