More than 20 million people cruise on ships each year. Not surprisingly, the average age of the cruiser is pushing 50, which means it’s time for the cruise lines to double down and attract younger audiences. One way to do that is with technology.

I was invited as a member of the press to join the maiden voyage of Celebrity Cruise Lines’ new ship, The Edge. The high-tech pièce de résistance was a cantilevered restaurant that hung off the side of the ship and climbed up and down the ship’s decks for constantly differing views. There were also Cirque du Soleil-like inspired nightclubs and a large outdoor TV on a landscaped patio deck.

But it was the hands-on IoT experience that intrigued me. There’s no better way to get on the IoT bandwagon than to try it out. According to Jay Schneider, senior vice president of digital experience at Royal Caribbean Cruises Ltd., IoT is used in predominantly two ways: in the stateroom experience and behind the scenes to provide intelligent operations.

The Celebrity Edge’s stateroom automation, digital key and TV experience are all IoT based. Together, they allow guests, either through a digital touch panel installed in every stateroom or through the Celebrity Cruises mobile app, to control their room temperature, lights and blinds, room access and in-room entertainment center. 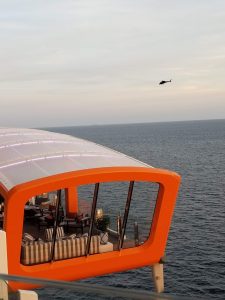 A restaurant that moves up and down the side of the Celebrity Edge ship. Source: Robin Raskin

Each room has “scenes” designed as custom experiences to orchestrate automation tasks. For example, the “sleep” scene turns off the TV, closes the blinds and shuts off all lights except bedside lamps that slowly dim until the entire room is dark.

The stateroom’s digital key-enabled door locks give guests in the stateroom the ability to unlock their stateroom with their smartphone. The TV can also be controlled from a smartphone, including the ability to stream content from your own device through Apple TV and Google Chromecast integration.

The IoT capabilities are a combination of an in-house-created app integrated with third-party systems. Stateroom automation is powered by Saia, a digital key is powered by Assa Abloy and the TV experience is powered by xControl.

Like all IoT experiences, the stateroom was not without its mental disconnects. Lying in a bed in a small stateroom and controlling your environment was the ultimate couch potato experience. My IoT-controlled windows never did open to let the sea breezes in. And opening your stateroom door with a phone app takes much longer than a key swipe. But the big double-edged sword is that staying connected meant carrying a charged mobile phone around the ship. Granted, the app also provided a valuable lifeline to see all activity and make reservations while aboard ship. 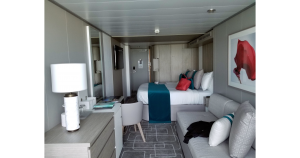 A stateroom on the Celebrity Edge. Source: Robin Raskin

Carnival Corporation took a different approach. The company has been experimenting with frictionless, hyper-personalized experiences brought to you through its Ocean Medallion. The medallion is a disc the size of a quarter that can be worn in a variety of ways — as a wristband, pendant, clip or even in your pocket. The medallion serves as the key to everything you do on the ship. Because it’s a screenless location-based device, it’s not going to provide things like the ship’s activity schedule, but what it does is create personalized room services and contactless payments.

The Ocean Medallion system was created by Nytec, a design and engineering firm, as a wearable platform capable of just-in-time guest recognition, secure authentication and a variety of unique, personalized experiences. To enter their room, guests simply walk up to the door and it opens. When the guest gets to his floor, the cabin is aware. It begins to automatically ready the room as the guest prefers it — blinds open or closed, lights on or off, heat or AC set to his liking. An 8-inch display outside the stateroom greets you by name and welcomes you back.

“The medallion controls the stateroom lights, blinds and access automatically based on your preferences. The system learns over time based on who is in the room and what each guest does,” said Vince Ball, vice president of product innovation at Nytec. Ball said the medallion also feeds valuable data to Carnival about room behavior.

In addition to room access, the medallions can also be used to locate your family and friends while on the ship. It’ll even let you order food and beverages and then find you when it’s time to deliver. In essence, the medallion tracks your location while aboard and communicates the appropriate information to the devices ready to serve you.

Once you’ve whet your appetite for IoT on the ship, I’m betting you’re going to want these features at home, too. Carnival’s medallion system seems a bit more organic since it eliminates the need to haul your phone around, but Celebrity’s integrated app makes keeping up with activities onboard easy. Both make cruising with IoT a blast. Who’d have guessed that you’d get an IoT immersion lesson at sea?