This content is part of the Essential Guide: How do SharePoint's BPM benefits measure up?

You could be forgiven for thinking that socialand business process management don't belong in the same sentence, but at one energy company, "social BPM" helps make processes fly like the wind.

A few years ago, EDP Renewables North America, the Houston-based U.S. subsidiary of a European energy giant, realized that it needed to update its approach to managing problems with the turbines on the 29 wind farms it operates nationwide.

At the time, the company relied on BPM technology alone to track turbine issues, using a process that senior manager Stephan Blasilli described as resembling a traditional IT ticketing system. "If you had an issue on-site and you couldn't resolve it right away, you entered it into a system for first-level support," Blasilli said. "If that person couldn't resolve it, it would go to other people throughout the company."

Resolution time took anywhere from a few days to a month. From an employee survey, EDP discovered that workers considered the issue-support system a black hole. "They would email and there was no follow-up," Blasilli said. People in the field often didn't know who -- if anyone -- was working on their tickets. "Sometimes multiple people were on the same problem at the same time and not realizing it."

Before sailing with social BPM

How can your company make sure it's getting the most out of its social BPM initiatives? Following are some suggestions and best practices from BPM experts:

In overhauling the system, EDP decided from the start to include a social media aspect, and the company began rolling out its system, based on Appian BPM software, in mid-2011. Today, about 200 field employees use the system, which is equipped with an easy-to-use social media interface, to collaboratively troubleshoot from the company's far-flung locations. Problems are resolved, on average, 10% faster for large issues and at least 25% faster for small issues. And all because of the unlikely marriage of social media and BPM. Or is it really so unlikely?

After all, BPM is about, well, managing business processes -- that is, taking a systematic approach to improving organizational workflows, typically with the goals of boosting efficiency and productivity.

Social conjures up precisely the opposite image, one in which efficiency and productivity go out the window as employees fritter away time on Facebook, Twitter, Pinterest and other social media sites.

But when used well, social BPM brings together the best of both approaches.

"Can you combine these two into something meaningful that you can derive significant business value from?" Anthony J. Bradley, an analyst at consulting and market research company Gartner Inc. in Stamford, Conn., asked during a keynote speech at a Gartner BPM conference in 2012. "The answer is absolutely yes. This is a new frontier in business process management."

What makes social BPM a game changer? In a word: simplicity.

"The heart of social business collaboration -- and the thing that will persist long after the hype has died -- is a software interface that is so intuitive and familiar that it requires virtually no training," said Matt Calkins, Appian's president and CEO.

That's a major benefit to process improvement. "It solves BPM's historical problem of being too complicated, too rigid," Calkins said. A social user interface “allows everyone in an organization's value chain to participate in process," he added.

That sense of inclusiveness is what distinguishes social BPM, a still-evolving concept, from the traditional approach to collaboration, which dates back to the emergence of groupware, the first generation of collaborative software, in the 1990s. Clay Richardson -- an analyst from Forrester Research Inc. in Cambridge, Mass. -- who's often credited with coining the term social BPM, has summed up the difference this way: Collaborative BPM typically involves a small, controlled group of people working together toward a specific outcome. Social BPM is much more open and transparent, involving larger groups. "Anybody can see what's going on and give direct comment and feedback," Richardson said.

That crowdsourcing capability, in turn, is where social BPM delivers real value. As any manager in virtually any organization knows all too well, convincing users to adopt a new process can range from challenging to impossible, especially if those users weren't involved in creating that process. Injecting social networking capabilities into the traditional process improvement approach provides a new way for users to be involved in -- and engaged with -- process management from design through deployment and beyond.

Out of many, one

That's what's happened at EDP. "The system is totally transparent. Every full-time employee in the company has access," Blasilli said. The social media aspect eliminates some of the bottlenecks of traditional workflow products, he added: "We kept it pretty open in terms of process and the steps that employees have to go through," he said. In many cases, field teams can solve problems quickly, without going through multiple steps and levels of approval.

In addition, the system, known as Cobra -- a contraction of collaboration -- captures process changes and solutions to turbine problems, saving them to a searchable database. During the system's first nine months in operation, employees accessed the shared files more than 3,000 times, which Blasilli said is dramatically reducing reliance on email-based tracking and document-sharing.

That's an especially critical benefit for EDP. "We are an immature industry. It's evolved so fast that there is often no solution written down or documented," he said. "So for us, it's really important to provide our employees with existing solutions. Now all that information is stored in the system, and the system is searching continuously for information that is somehow linked to the issue that is entered by a person who's discovered some kind of problem."

Now EDP is exploring adding social BPM to other functions, ranging from materials procurement to assessment of wind conditions. "I think things will go more and more toward social," Blasilli said. He quoted author and strategist Don Tapscott's assessment that social and collaborative tools are rapidly becoming today's top communication technologies. "He talks about replacing email with social media," Blasilli said. "That is exactly what we are doing."

Not surprisingly, social media capability is rapidly becoming a standard feature in most vendors' BPM suites. 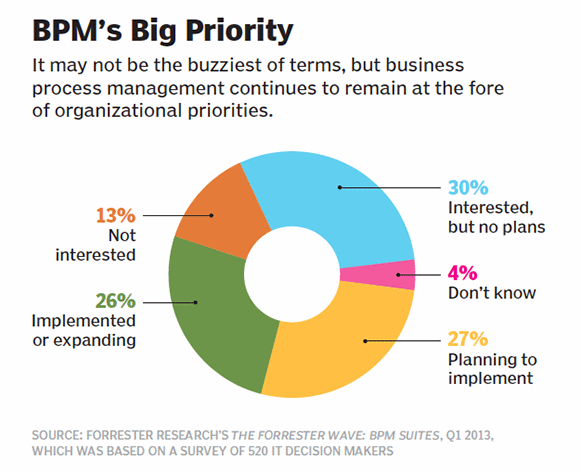 One recent example: In August, BP Logix, in Vista, Calif., released Process Director 3.0, a new version that adds extensive social media capability to the company's flagship BPM product. "One of the most important trends that we've identified in the BPM community is the transition of BPM from a back-office automation tool to a partner-and-customer-facing solution," said E. Scott Menter, the company's vice president of business solutions. "If you're going to reach out to partners and customers, you have to go to where they live." (See "Before Sailing With Social BPM").

Increasingly, both groups -- along with employees and other users -- make their homes in social media. So BP Logix enhanced the new version with strong Twitter and Facebook integration, and the company plans to continue adapting the product for use with other social media sites.

But Menter emphasizes that the concept involves more than simply connecting with prospects in new ways or monitoring "the social media fire hose" to see what customers are saying about your company. "You can also give them appropriate access to your business processes using their social media identities," he said.

For instance, a training company might integrate the social media capability with its registration process and then monitor Twitter or Facebook, answering questions or addressing comments from users who might be interested in signing up for its classes. "The prospective student can use the same Twitter or other social media identity that she used to post her original comment in order to log in and begin the registration process," Menter said. "That's not only easier for her, as she doesn't have to create yet another identity, it's also extremely valuable for the company, which can now trace this particular sale to that original question."

A puzzle for some

But not everybody has jumped aboard the social BPM bandwagon, and even its proponents acknowledge that the approach has its limitations. (In 2010, Richardson even wrote a blog post titled "Is Social BPM a Methodology, a Technology or Just a Lot of Hype?")

First, as some analysts have pointed out, the marketplace lacks a business equivalent of the most widely used social media site: Facebook. While many products integrate with Facebook, or imitate some of its functions, there isn't yet a platform or tool that duplicates the Facebook experience in a corporate environment.

For more on social BPM

Get acquainted with social BPM

How to achieve success with social networking

In addition, while many organizations use social technologies or BPM -- or both -- not all are well-equipped to use them together. Successfully using the two approaches in tandem requires an open, transparent culture, Richardson and other experts have said. Obviously, social BPM won't work effectively in situations involving highly confidential data or complicated approval processes for information-sharing.

Even some managers from companies with collaborative cultures say they don't see a need for the social part of social BPM. Case in point: Bluebird Auto Rental Systems, a small company that makes software for car rental systems. Charlie McGougan, Bluebird's IT director, lives and works in Lubbock, Texas, but he's in daily contact with his colleagues at the company's Dover, N.J., headquarters. And while Bluebird uses BPM products from Progress Software, McGougan said the company isn't using social BPM. "I'm not really sure what we would do with it," he said.

Some BPM experts share McGougan's view. Among them: Steve Weissman, a consultant at the Holly Group, a Boston-based consultancy. "Sorry, but I'm having a hard time wrapping my head around what 'social BPM' actually is," Weissman wrote in a forum on the BPM-focused website ebizQ in July 2011. "I glean that it sort of is 'regular' BPM injected with a heavy dose of collaboration. If so, then I really don't get what the 'new' is here. Maybe I'm an outlier, but I've always approached BPM this way, since processes nearly always reflect the people that work them, and managing those processes thus means managing the ways people work together."

Two-plus years later, Weissman said he still doesn't get social BPM. "What's really changed from calling someone on the phone 30 years ago to sending an email 15 years ago to the system sending you a tweet today?" he asked. "From a process standpoint, it hasn't changed anything."

He recommended that managers pay less attention to the "next shiny object floating by" and more on exactly what they're trying to accomplish. "I've been saying forever: Focus on the business problem that you're trying to solve," he said. "The tools are almost irrelevant" -- and, he added, they all change over time.

But at EDP, executives believe in the power of social BPM. The company estimates the initiative has generated a return of $200 million. Though for Blasilli, the biggest benefit is having new ways for employees to work together. "What we are doing in our company is creating a way of collaboration -- and collaborative decision making" that older tools couldn't provide, he said. "We want to do more and more of that."

Dig Deeper on BPA and BPM