This content is part of the Essential Guide: How do SharePoint's BPM benefits measure up?

While telecommunications technology may help create the feeling that the distance between people around the world is shrinking, the workload IT manager David Higgins found himself dealing with was only expanding. The in-house tool tandem service provider HyperCube created during the organization's startup days reached a point where it wasn't scalable anymore, requiring Higgins to put out a call for an alternative system.

Before Higgins was on board, the mentality was to just quickly get something up and running, which ultimately wreaked havoc on the back office workflow management software tool. "There was not much of a relational database layout," he said. "Whenever they [the original software development team] needed to do something, they just did it without considering the longer-term impact."

As new products were added over the years, the issues only compounded. Higgins was faced with two options: rewrite the current in-house workflow management software tool or implement a third-party package.

Higgins ultimately decided rewriting the workflow management software tool would be too big of an undertaking and not the best use of time and resources. Instead, he decided he wanted to get a jump start on the project by bringing in a third party to get the process flow engine up and running.

Unlike the previous mindset of "hurry it up and get things going," Higgins and a team of software developers spent several months researching options. Some of the features the group was seeking in a BPM tool that offered:

The team felt having a Web services layer was of utmost importance to grant external access. "Ultimately we wanted to have our customers be able to log directly onto our order-flow process," Higgins said. 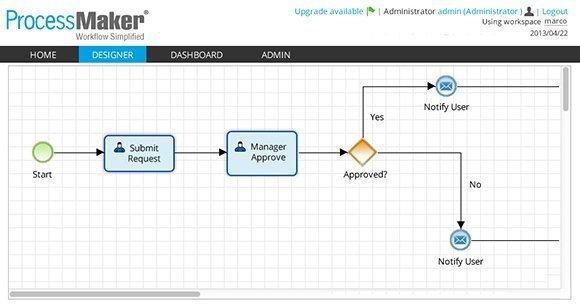 Several vendors, including Joget, Bonitasoft and ProcessMaker, were reviewed. Higgins and his team downloaded demos and worked with each product to get a feel for how they worked and what they offered.

After carefully reviewing all the options, it was determined that ProcessMaker was the best fit for HyperCube's growing needs. "They had a Web series layer that was already developed that we could use," Higgins said, who noted that the other offers had similar features but didn't have the same level of ease for laying out processes.

The implementation started off as planned with weekly meetings and tweaking things as needed -- until about halfway through the process. Higgins and his team wanted to start off with an existing toll-free termination product because they already knew the workflow and thought it would be simple, but a new product hit the shelves and they decided they wanted to try that one first instead.

"It wasn't a 90-degree change, it was probably about a 40-degree change," Higgins said, but the change caused some hiccups because of the relatively complicated workflows being dealt with. As a result, time had to be spent redoing the database and workflow.

While Higgins was pleased with the BPM workflow management software tool he chose, there are some things he'd advise other IT professionals to consider if faced with a similar project. "Make sure you have your workflows understood end-to-end as much as possible," he said. "Spend a lot of time on your database schema. Make sure all the relationships make sense and are easy to traverse."

Spending a good amount of time on definition is also something Higgins would recommend. While it's impossible to see into the future, planning for it is an imperative step to avoiding unnecessary obstacles and redoing work.

About the author:
Maxine Giza is the associate site editor for SearchSOA and can be reached at [email protected].

Dig Deeper on BPA and BPM