This content is part of the Conference Coverage: VMware Explore 2022 news and conference coverage

SAN FRANCISCO -- Over the next five years, VMware plans to transform itself from a virtualization vendor to a multi-cloud infrastructure provider to attract a new generation of developers.

The remake, which has already started, will change the company's products, strategic direction and marketing, top executives said. The transition was already evident in cloud-focused tracks at this week's VMware Explore conference.

Driving VMware's dramatic shift is the cloud development explosion in the company's customer base. Today, 75% of VMware customers use at least two public clouds and 40% use at least three, CEO Rangarajan Raghuram said during an analyst briefing at Explore.

Therefore, VMware plans to aim its products today and in the future at developers building applications on AWS, Microsoft Azure and Google Cloud.

"It is these teams that we want to attract because these are the teams for whom we are building the products," Raghuram said. "This is what's going to be the future of IT."

Chasing that future led VMware to change the name of its annual conference from VMworld to VMware Explore. The old name was too associated with VMware's vSphere virtualization platform and IT teams within private data centers, Raghuram said. VMware wants to broaden to attract vendors and turn Explore into an event that covers all the critical elements of a multi-cloud architecture.

An example of Explore's broader scope was the tracks held by Explore's Diamond sponsors AWS, Microsoft and Google. Each of the courses was independent of VMware.

The executives look to the future at a time of uncertainty for VMware. Broadcom expects to acquire the company for $61 billion by October 2023, and its plans for VMware could differ.

In an earlier briefing with the media, Raghuram said Broadcom is evaluating VMware's business. For now, "It's just business as usual." 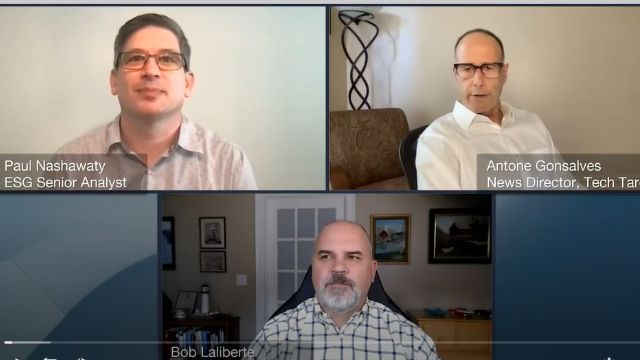 At Explore, the most significant technology releases were Aria, a new portfolio of multi-cloud management products, more built-in container development features for the Cloud Foundry platform as a service, and cloud-related enhancements to vSphere and vSAN.

"I privately tell the teams that one of the biggest multi-cloud opportunities is going to be in networking," Raghuram said.

VMware talks to customers about the need for a common network control plane that ties workloads running on various cloud platforms. Presenting VMware as the glue in a multi-cloud environment is a crucial sales strategy.

VMware expects to see a more unified IT infrastructure group within companies over the next five years. Infrastructure teams often operate separately on each cloud provider and the private data center.

"That model will not last long, simply for the reason that you expose too much risk for the organization from a security point of view, from a resilience point of view, and an economical cost point of view," Raghuram said.

Raghuram expects companies to turn to a centralized governance model that establishes the guidelines for multi-cloud development teams. VMware would deliver infrastructure, such as network controls and security, as code for developers' software toolchains and development processes.

Under that model, VMware can deliver approved APIs and code libraries for a more secure software supply chain.

"That is the model for which we're building towards," Raghuram said.

With the increase in customers heading to the cloud, VMware sees corresponding growth in the demand for managed services. Many members in its cloud provider program have become managed service providers.

"We will see that even more," Raghuram said. "Even [among] our traditional partners. Some of them will do more managed services."

"We hardly ever sell [SD-WAN] without a managed service provider partner," Dhawan said. "In fact, we don't even recommend it. It's so much easier for the customer."

VMware plans to go in another direction with the Tanzu Mission Control, sold as SaaS today. Due to customer demand, the company's product roadmap includes customers self-managing the control plane for Kubernetes clusters -- devoid of cloud connectivity.

"Originally, when Tanzu Mission Control was built, it was not built that way," Raghuram said. "Now that team is taking that as an additional use case and trying to build it."

Antone Gonsalves is a news director for TechTarget Editorial. He has deep and wide experience in tech journalism. Since the mid-1990s, he has worked for UBM's InformationWeek, TechWeb and Computer Reseller News. He has also written for Ziff Davis' PC Week, IDG's CSOonline and IBTMedia's CruxialCIO, and rounded all of that out by covering startups for Bloomberg News. He started his journalism career at United Press International, working as a reporter and editor in California, Texas, Kansas and Florida.