The following is an excerpt from the book FISMA Compliance Handbook written by Laura Taylor and published by Syngress. This section from chapter 3 discusses the five methodologies that agencies use as a basis to carry out FISMA compliance.

There are some legacy methodologies, none of which are used anymore, though you may come across them in reference materials and those are DITSCAP, NIACAP, JAFAN 6/3, and NISCAP. You'll notice that we are starting to get heavy on acronyms. Some of the acronyms used in FISMA compliance are so well known that many people don't remember what the acronyms stand for anymore. Before I dive into the differences between these methodologies, I'm listing the acronyms and complete name in Table 3.1 for reference. If you're new to FISMA, don't let acronyms scare you off -- they're benign. 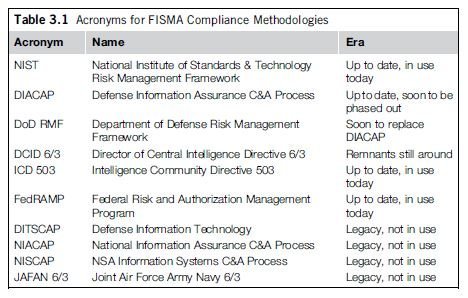 Although all federal agencies base their FISMA compliance program on one of the current methodologies, each agency's program is at the same time unique to that particular agency. No two compliance programs are exactly alike, with the exception of FedRAMP. Chapter 23 is dedicated to FedRAMP, so I won't be discussing it much prior to that chapter.

The NIST Risk Management Framework (RMF) was designed for unclassified information. Unclassified information used to be referred to as Sensitive But Unclassified (SBU), however, that terminology has been replaced with Controlled Unclassified Information (CUI). The framework for the NIST RMF methodology is described in a publication known as NIST Special Publication 800-37, Revision 1, Guide for Applying the Risk Management Framework. A copy of it is available online at http://www.csrc.nist.gov/publications/nistpubs/800-37-rev1/sp800-37-rev1-final.pdf.

The NIST standards and methodology are updated more frequently than any of the others. Additionally, the NIST high-level methodology document, SP 800-37 includes a vast amount of supporting documents that complement the foundational guidelines. Prior to updating their guidelines, NIST goes to a lot of trouble to solicit review and comments from both public and private industries, which greatly enhance the quality of their publications. They receive thousands of comments and painstakingly comb through each one of them -- intellectual crowdsourcing at its best.

At checkout, use discount code PBTY14 for 25% off

The NIST guidance is well written and easy to follow. SP 800-37, Revision 1 provides a framework -- following it won't answer all your compliance questions as it leaves some room for interpretation to allow flexibility. Agencies and bureaus embracing the NIST RMF typically use NIST Special Publication 800-37, Revision 1 as a guide to develop their own internal process and handbook customized for their own unique requirements. In essence, NIST Special Publication 800-37, Revision 1 is a call to action and provides to agencies a "to do" list for information security program plans, information security control selection and implementation, policies, procedures, training, and security business processes that need to be put into place.

The Defense Information Assurance C&A Process (DIACAP) is the primary compliance methodology in place at U.S. Department of Defense agencies. DIACAP has been used by the Department of Defense since November 28, 2007. The overarching reference architecture for the DIACAP can be found in a document known as DoD Instruction 8510.01. That document can be found at the following URL: http://www.js.pentagon.mil/whs/directives/corres/pdf/851001p.pdf. DoD Instruction 8510.01 is comparable to the NIST SP 800-37, Revision 1 -- it provides the framework for the DoD C&A program. The baseline security controls that DIACAP uses can be found in DoDI 8500.2 -- an interesting read, even if you don't work for the Department of Defense. DoDI 8500.2 makes reference to various other security standards such as the Common Criteria Evaluation and Validation Scheme (CCEVS), NIST Federal Information Processing Standards (FIPS), and NIST FIPS 140-2. You can find 8500.2 at the following URL: http://www.dtic.mil/whs/directives/corres/pdf/850002p.pdf. The DIACAP life cycle is illustrated in Figure 3.1. 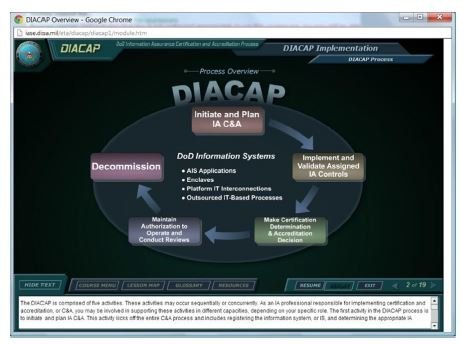 A unique element of DIACAP is that it focuses on the Global Information Grid (GIG). The GIG is a complex interconnection of systems, networks, and communication devices that operate with multilevel security using components that have well-defined mission assurance categories. Consisting of satellite systems, terrestrial systems, voice systems, and data systems, the GIG is an extremely complex and evolving network of communication systems. The GIG is made up of four different networks that are integrated together in various capacities. The four networks are known as NIPRNet, SIPRNet, NSANet, and JWICS. The four GIG network acronyms and the network security classifications are listed in Table 3.2.

SIPRNet's primary purpose is to transmit military orders. JWICS primary purpose is to transmit intelligence information to the military. NIPRNet is used primarily for nonclassified combat support, and there is an air gap between NIPRNet and SIPRNet. NSANet is used by the National Security Agency/Central Security Service for signals intelligence, communications monitoring, cryptology, and research. The Department of Defense offers a free online DIACAP training course that will help you better understand the DIACAP principles. You can access the course here: http://iase.disa.mil/eta/diacap/index.htm.

In the near future, the Department of Defense will be phasing out the DIACAP and replacing it with a new methodology known as the Department of Defense (DoD) Risk Management Framework (RMF). The DoD RMF is closely aligned with the NIST RMF and makes use of NIST security control baseline controls with additional controls added from Security Categorization and Control Selection for National Security Systems (CNSSI) 1253, published March 15, 2012. CNSSI 1253 is available at the following URL: http://www.cnss.gov/Assets/pdf/Final_CNSSI_1253.pdf. CNSSI 1253 prescribes minimum standards that national security systems must use, based on the definition of National Security System (NSS) as described in FISMA section 3542 as

...any information system (including any telecommunications system) used or operated by an agency or by a contractor of an agency, or other organization on behalf of an agency -- "(i) the function, operation, or use of which -- "(I) involves intelligence activities;"(II) involves cryptologic activities related to national security; "(III) involves command and control of military forces; "(IV) involves equipment that is an integral part of a weapon or weapons system; or "(V) subject to subparagraph (B), is critical to the direct fulfillment of military or intelligence missions...

National security systems are those systems related to intelligence activities, equipment that is an integral part of a weapons system, command and control of military forces, cryptologic activities related to national security, or equipment that is critical to the direct fulfillment of military of intelligence missions. NIST clarified the definition of National Security Systems in August 2003 when it released, NIST SP 800-59, Guideline for Identifying an Information System as a National Security System. More information on the DIACAP to DoD RMF transition can be found on the URL for the Joint Task Transformation Initiative Working Group here http://www.csrc.nist.gov/groups/SMA/ispab/documents/minutes/2012-10/ispab_oct2012_dcussatt_dod-rmf-transition-brief.pdf.

Intelligence agencies that come under the purview of the Office of the Director of National Intelligence use ICD 503 and DCID 6/3 for FISMA compliance. DCID 6/3 is the older of the two, and the goal is to phase it out. Old systems are still following DCID 6/3 until they are up for reaccreditation. ICD 503 was signed and went into effect on September 15, 2008.

DCID stands for Director of Central Intelligence Directive and 6/3 refers to the process described in Section 6, part 3 of the compendious Director of Central Intelligence Directives.2 The DCID 6/3 requires that systems be characterized by Protection Levels (PL), and DCID 6/3 defines five different protection levels. DCID 6/3 deals only with classified information, and its PL model was designed to ensure that only properly cleared people had access to classified information. The DCID Standards Manual defines the DCID 6/3 certification and accreditation process. DCID 6/3 makes use of the DCID 6/3 Policy Manual. 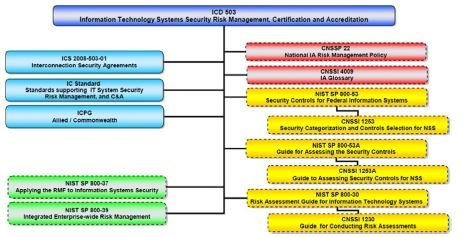 ICD 503 is more closely related to the NIST RMF than DCID 6/3. It refers to CNSS and NIST guidance and minimizes the amount of IC-specific guidance. An illustration of how ICD 503 incorporates CNSS and NIST documents is depicted in Figure 3.2. ICD 503 addresses policies for:

A key element of ICD 503 is that ICD 503 established joint Department of Defense and Director of National Intelligence (DNI) reciprocity objectives.

Many of the requirements for IC certification and accreditation are based on physical security, as classified information must always be physically secured. Aside from physical security, the IC puts a lot of emphasis on encryption. The emphasis in these two areas is what really sets the DCID 6/3 and ICD 503 apart other methodologies.

More on FISMA compliance from SearchSecurity

FISMA Compliance and the Evolution to Continuous Monitoring

FISMA compliance made easier with OpenFISMA

All the compliance methodologies call for accountability. Security accountability of IT systems means that activities can be traced back to a person or a process and that system users will be held accountable for their actions. One of the reasons that roles and responsibilities are clearly defined in every Security Package is to make it clear who is responsible for what. The different compliance methodologies described in this chapter are very similar in numerous ways. If you read all the guidance documentation for each, you might come to the conclusion that the different methodologies are essentially the same thing written from different perspectives.

For the most part, the recommendations in this book will apply to all methodologies unless I point it out otherwise. The guidance I will refer to most often will be the NIST RMF since it is more up to date than the guidance for the other methodologies. NIST guidance is also publicly available for anyone to review, and in that sense, it is the most open source of the compliance methodologies. It is not my intent to republish any of the methodologies.

Something to remember is that every agency, bureau, and department in the government that has built a robust and thorough security assessment and authorization process has their own unique requirements built into it.

The security assessment and authorization methodologies discussed in this book are well entrenched in U.S. federal agencies. However, there is nothing that says that these methodologies and practices cannot be adopted and used by private businesses, publicly traded corporations, and nonprofit organizations. As discussed in Chapter 2, in order to obtain new contracts under government task orders, government contractors must now sign agreements that stipulate that they are in compliance with FISMA. However, any organization can make use of these methodologies, whether they have government contracts or not.

As a result of Executive Order 13636,3 a group of experts is working on transforming much of NIST's guidance used for information security management of critical infrastructure which is primarily owned by the private sector. The group is known as the Integrated Task Force (ITF), and it is facilitated by the Department of Homeland Security. The ITF is composed of eight working groups with eight different focus areas:

Any organization that processes sensitive information should have a methodology for assessing and authorizing the security of their systems whether they are subject to regulatory laws or not. One of the goals of Executive Order 13636 is to create incentives for private sector companies to be more proactive about cyber security.

About the author:
Laura Taylor leads the technical development of FedRAMP, the U.S. government's initiative to apply the Federal Information Security Management Act to cloud computing. In 2006, Taylor's FISMA Certification and Accreditation Handbook was the first book published on FISMA. Taylor has contributed to four other books on information security and has authored hundreds of articles and white papers on infosec topics for a variety of web publications and magazines. Specializing in assisting federal agencies and private industry comply with computer security laws, Taylor is a thought leader on cyber security compliance. Taylor has led large technology migrations, developed enterprise wide information security programs, and has performed risk assessments and security audits for numerous financial institutions.