By the year 2020, Gartner projects that devices connected to the internet of things will surpass 20 billion. IoT devices are increasingly being used as smart household devices, beacons and wearables, and in industrial applications. Businesses are discovering new opportunities to engage their customers, and the ability to add communication features is opening doors for new marketing opportunities.

Data gathering and machine-to-machine communication is only the first phase of IoT integration, however. Web Real-Time Communication (WebRTC) is the next trend in IoT functionality, focusing on two-way communication between users. This communication can be video, audio or a combination of the two, and is encrypted for maximum security.

WebRTC debuted as an open source offering from Google in 2011. Developers are able to use video and audio communication between users, connecting IoT devices via a web browser rather than installing special plugins.

How does WebRTC work together with IoT?

WebRTC can offer multiple features toward the development and enhancement of IoT applications:

Business use cases of WebRTC and IoT

As of 2016, WebRTC-enabled products created a value of more than $10 billion throughout the world; and there are projections to reach $81.52 billion by 2025. When it comes to the global evolvement of WebRTC, North America holds around 40% of the total market share due to mobile device proliferation and access to fast and reliable internet connections. 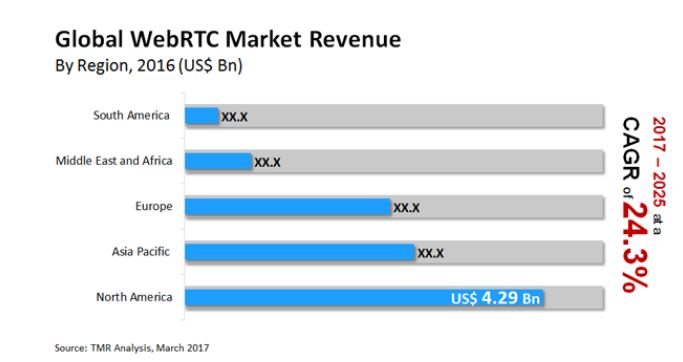 Use cases of prospective intersection of WebRTC and IoT include smart home, security and industrial IoT applications.

Smart home applications are the area where WebRTC can potentially make the most lucrative inroads in the near future. Two prominent instances are with smart mailboxes and door intercom devices. With smart mailboxes, home owners who work during the day are able to unlock their mailboxes from anywhere while communicating with couriers to either receive deliveries or enable them to be sent. With door intercom devices, residents can speak with anyone that comes to their door directly from the privacy and security of inside their homes — or from virtually any place, which provides additional convenience.

Recent examples include Amazon’s Motion Sensor API, Doorbell Event Source and Alexa.RTCSessionController, which connect smart cameras and doorbells to Echo devices. Smart doorbells can send messages to Echo devices, and the Alexa.RTCSessionController can set up a two-way connection between smart displays, like the Echo Show and Echo Spot. Integration of WebRTC with home communication devices allows users to stick to their favorite smart products while at the same time enhancing them with video and audio streaming features.

WebRTC for surveillance and authentication

WebRTC can also be used in video surveillance systems, which are typically divided into two categories: cloud and point to point. The latter option has a number of issues, including low stability of video transmissions, inability to take real-time actions and local data storage, which make loss of recorded videos a more acute issue. This is where the cloud becomes the answer, storing well-structured sets of video recordings provided by all monitoring devices, while WebRTC can be implemented for video streaming in real time.

Since we’re speak about security, WebRTC can come in handy when it comes to smart biometric authentication. The essentials here comprise facial capture and recognition of voice, which are further enhanced with data science, applied for higher precision. The role of WebRTC is to stream data to the server for recognition, so as not to overload the front end.

Industrial enterprises tend to be conservative when it comes to innovation and new technology. However, smart factory and connected worker concepts are on the rise, and WebRTC technology adds valuable features such as remote support and collaboration via audio and video communication.

In all of these use cases, WebRTC utilizes mandatory encryption for security purposes, and JavaScript APIs use HTTPS connections. As a result, any developers working with WebRTC are given an additional layer of protection for IoT devices.

Development of WebRTC modules from scratch may be expensive, but that is why platform-as-a-service offerings are emerging on the market. Products like OpenTok or Twilio use WebRTC advantages, adding a cross-platform protocol for audio and video calls that can be conveniently integrated with software.

WebRTC satisfies one of the main necessities of IoT users – communication — so the use cases for this technology will keep expanding.