This is the second in a three-part series on IoT, location and TDOA. To read part one, click here.

Time difference of arrival (TDOA) in low-power wide area networks (LPWANs) has some common, as well as unique, challenges with respect to accurate localization of devices in the real world. These include:

Each of these variables can contribute to performance degradation in accuracy of localization of your devices. Network-based location computed from timing measurements can be a very low-power path for providing localization, but you need to be aware that performance will vary by network and network provider in addition to the above technical challenges.

Ensure you perform or are presented with enough evidence that a given system will meet your real-world needs. Coverage and deployment numbers are not always sufficient to indicate what level of accuracy a given area of coverage will provide.

Take urban morphology, which describes the landscape, building structures, terrain and so forth that may affect signal propagation, reflection and occlusion. The performance of all localization technologies is impacted by these features to some degree. For example, GNSS suffers from “urban canyons” in which dense forests of tall buildings present visibility and multipath signal reflections that can decrease GNSS accuracy in these areas.

LPWANs are no exception to this rule. In order to determine accuracy and availability of a given location technology, we always look at varying our test cases to measure different performance capabilities as in the below example test site selections.

If you are doing your own testing, ensure you choose test locations in diverse set of urban morphologies as in the figure below. 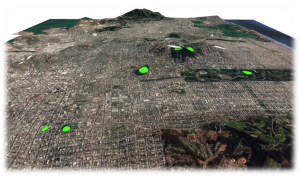 There are additional techniques that are available for improving the overall performance of TDOA:

For example, we have employed these techniques to successfully reduce error to ~150 meters at the 67th percentile using single location attempts while in an extremely challenging deployment environment. In addition, we have demonstrated the value of convergence in a smoothing algorithm for higher accuracy of static devices — achieving 50-meter accuracy for these devices using the same set of single location attempts.

Let’s take a bit of a deeper dive to show how some of these techniques can be applied in real-world situations.

The test area was chosen to test localization performance in a particularly challenging environment. In this scenario, the challenge was primarily due to the physical deployment of the gateways in which they were deployed in a straight-line, “string of pearls” configuration. This configuration is challenging in that the TDOA solver can only solve in one dimension — along the line of gateways. The lack of the gateways in the second dimension limits the overall accuracy that can be achieved when using TDOA. Fortunately, a power-based method allows it to resolve location in the second dimension.

The figure below shows the following: 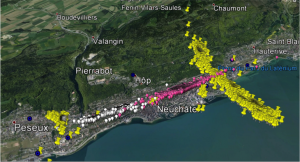 The resultant hybrid TDOA location is shown in the following diagram for the two static test locations:

As mentioned, by taking advantage of multiple packets over time, we have shown we can reduce this error to ~50 meters for static devices.

An example of the convergence process in action is shown in the figure below. The figure shows series of single-shot locations for five devices (each device is a different color) and the estimated error after smoothing at any given moment all fixes for a given device. For example, the plot shows that the orange curve (device) has an initially large error of almost 450 meters, but very quickly converges to 50 meters by smoothing the initial outlier/poor fix. As mentioned, TDOA measurements are very sensitive to multipath error, requiring that erroneous measurements to be weight and aggregated with caution in a location solver.

As the convergence algorithm receives more information, it begins to converge on the true position as shown below. 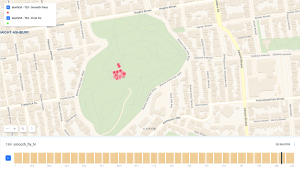