With the growing popularity of wearable devices for things like fitness, medical monitoring and tracking things like keys, their use in occupational health and safety seems like a given. Wearable devices with the right combination of sensors can be used to monitor not only the surrounding conditions of a work environment, but also bodily vital signs that may be affected, as well as any effects of hazards or stress on the wearer. Fortunately, the different sensor packages that may be needed for different situations do not need to be designed from scratch. They can be modified packages based on a single versatile combination of processor and real-time operating system. And of course, their associated application software provides their unique characteristics.

One example already in development is a wearable sensor system for athletic activities including cycling, football, marathon racing, rugby, hockey and more. This sensor system consists of a bundle of three sensors in a 28 mm x 13 mm x 8 mm package that is applied to the skin of the head underneath a helmet. There are three sensors integrated into this package: a six-axis accelerometer that can detect both direct and radial impacts, an optical pulse/blood oxygen sensor and an IR temperature sensor. The latter two are in contact with the skin. From the data supplied by these three sensors, coaches and medical staff can be alerted to values in bodily vital signs that may signal danger in time to prevent serious medical conditions.

Chief among these is concussion. A player who sustains a concussion that is not treated and goes back into the game still suffering from the effects can be exposed to a second concussion impact, which may result in a fatality within hours in a seemingly healthy patient. Other vital signs that can be detected as well, as evaluated in relation to each other, include heart issues such as arrhythmia, impending heatstroke, respiration problems and internal bleeding.

The advantages of modularity and the ability to modify such a design also apply to connectivity. IoT devices, of course, come into their own when they connect to edge computers, which in turn connect to the computing power present in the cloud via the internet. For personal safety systems, this means wireless communication. In the case of the athletic sensor system, this comes down to three choices. For team sports that are played on a court or playing field of limited size, 6LoWPAN is used to simultaneously connect multiple players to edge devices around the playing field. For wider-ranging sports such as marathons, the longer-range yet low-power LoRa is used. And for situations such as cycling, where it may not be a disadvantage to carry a smartphone, the device can use a Bluetooth connection and the phone will carry the signal on to the internet. 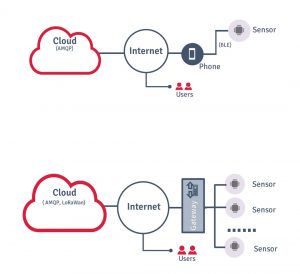 Two possible safety sensor configurations: Above, an individual carrying a smartphone with an internet connection via Bluetooth from the sensor device. Below, multiple wearers with a wireless mesh connection to a gateway connected to the internet.

This example serves to highlight the kinds of possibilities available for other areas, such as industrial safety, mining, oil field activities and more. Each specific area will have its own unique needs for the integration and placement of sensors. They will also have their own specific wireless communication requirements. And it goes without saying that each area will have very focused needs for the application software that gives them their specialized functions.

Consider the possibilities, for example, for different occupational safety helmets. Today’s models are aimed at protecting the head from impacts with steel beams, overhead machinery, rocky ceilings in mines, heavy equipment swinging from cranes in oil fields … the list goes on. But each of these areas also have their own unique hazards that may or may not directly involve the helmet.

Take, for example, the environment of a chemical plant. Today’s workers of course often wear badges to detect hazardous materials in the atmosphere. However, they do not deliver dosage data in real time. A safety system with a detector on the helmet combined with additional sensors for vital signs attached to the skin under the helmet (say, in the helmet’s internal webbing) could instantly deliver an alert to spike in hazardous material while also delivering data on stress, respiration, pulse and so forth. A similar design for a mining operation could sense the air in the shaft for the presence of gases, coal dust, etc. At the same time, it could also monitor respiration, blood oxygen and more for each individual worker. Additionally, an electronic location sensor could pinpoint the exact location of any anomalous readings and sound alerts. The placement of sensors can be tailored to their function. For example, sensors for carbon monoxide or hazardous airborne particles could be mounted in the jackets of firefighters. Construction workers could have shoes with weight-bearing sensors to alert for heavier-than-allowed lifting. The list goes on.

On the connection end, different wireless techniques would be appropriate for different situations. For example, use in a mine or an industrial plant would require the distribution of multiple gateways to get around the signal blockage of rock or steel walls and equipment. An open environment, like an oil field, would need a longer-range radio with distributed gateways and a different location approach to identify the points of alerts.

Such diverse technologies do not require a complete redesign if they are based on a platform that supports easy connection of devices, such as sensors and radios, and that comes with a wide selection of proven software support for the needed sensor devices. Coming up with a design focused on a specific area of activity is then a matter of selecting and connecting the right peripheral devices (both sensors and radio), along with their support software. The selected radio must also be used in the edge devices. Then the bulk of the value is added with the proper application software.

Part of that code would, of course, reside in the wearable device, but the bulk of the value would be in the analysis, storage and management code developed to run both on the edge devices and in a service in the cloud. For example, critical decisions, such as an alert to a radiation spike or signals that a particular worker was having breathing difficulties, could be quickly made at the edge in a gateway device. Other functions involving administration, worker history, assignments, scheduling, storage for longer term record keeping and so on could be done in the cloud application.

The future of industrial safety, as well as safety in other areas like athletics, can be richly addressed with creative technologies based on a common platform, but differentiated using specialized sensors and connection schemes — and, of course, creative applications. When these work together to signal specific hazards that can be either avoided or detected before becoming critical, the result is a safer and healthier participation in activities for both work and play.