Quick access to information about a server's CPU, memory, storage, fans, temperature and power status can be useful...

For those who are unfamiliar with the difference between the two, ESXi is the "skinny" version of ESX server. ESXi does not have a Linux-based service console where any software can be installed. So how do you obtain server health status on the two different versions of VMware ESX Server? Let's find out.

How do I obtain server health status with VMware ESXi Server?

Obtaining server health status with VMware ESXi Server is easy. To do this, just open your VMware Infrastructure Client (VI Client), select the ESXi server in the inventory, click on the Configuration tab, then on Health Status (shown below). 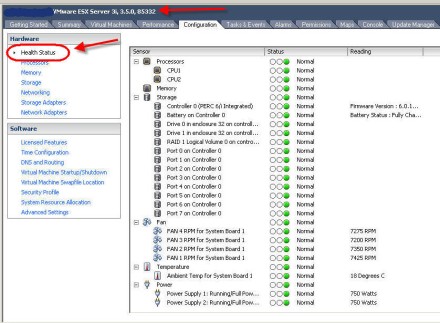 As you can see from the screenshot, the health status for this Dell 2950 server provides you the status for the following components:

On ESXi, this health status feature is built in and there is nothing specific you need to do to get this working. It supports hardware that is supported by ESXi and hardware that supports this level of health reporting.

As ESXi has no service console, there is no way to install any third party software to improve the level of reporting or get more information.

How do I obtain server health status with VMware ESX Server?

For an example, let's use a Dell 2950 server in contrast to ESXi. To obtain the same type of health status information as with ESXi's feature, you must install the Dell utilities in the service console. To do this, use the Dell DVD entitled "Dell Systems Management Tools and Documentation - P/N W473G Rev A00 May 2008" and insert it into the VMware ESX Server DVD drive.

To install the utilities, log into the service console of that ESX Server and mount the DVD with the follow command:
mount /dev/cdrom

Then, change the directory into the proper Dell Server Admin install for Linux by typing:
cd /mnt/cdrom/SYSMGMT/srvadmin/linux/supportscripts

Next, install the Dell Server Admin utilities:
./srvadmin-install.sh -b -w -s -a –r 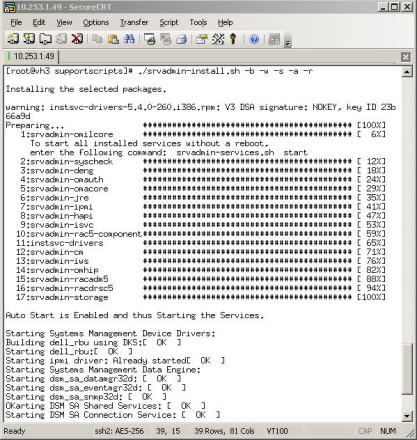 When finished, open a port in the service console firewall (security profile) for the webserver port that the Dell Server Admin utilities will use to provide the web interface (port 1311) by typing this:
esxcfg-firewall -o 1311,tcp,in,DellOpenManage.

Next, change the directory out of the mnt directory and eject the DVD:
cd /
eject /dev/cdrom

After the tools have been installed, open a web browser and go to https://servername:1311 to access the Dell Server Admin web interface.

Next, go to System, then Main System and see the Health status of all the system components (as you see in the graphic below). 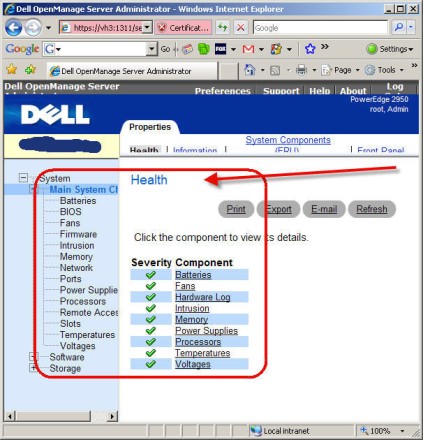 From there, you would select Fans to see the status of the fans, just as you would with ESXi health status (as you can see below). 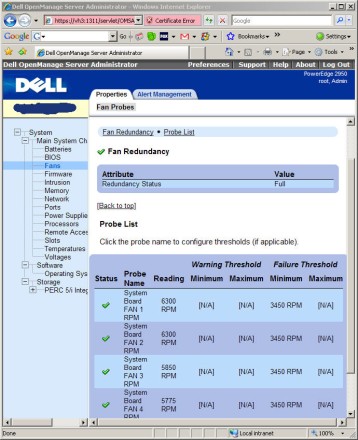 In closing, I find it interesting how ESXi and ESX server are still different in this aspect and how, to gain similar information, you must take very different steps. I am not here to say which platform (ESX or ESXi) is the best for you, only to point out the differences. Either way, it will be critical for you to know the health of your server as a VMware ESX Server Admin.

About the author: David Davis (CCIE #9369, VCP, CWNA, MCSE, CISSP, Linux+, CEH) is the Director of Infrastructure at Train Signal, Inc. He has written hundreds of articles and six video training courses – including the Train Signal VMware ESX Server video training series. His websites are Happy Router.com and VMwareVideos.com.