As the IoT wave is taking over the globe, enterprises are keen to realize its power to stay competitive in this fast-paced digital marketplace. Gartner predicted that by 2020 there will be over 20 billion connected things. This is evident with the rapid transformation of our day-to-day lives with smart homes, connected cars, smart cities, manufacturing and farms facilities, and wearables. There are endless possibilities, and numerous companies have already started their IoT journey. However, many factors, like robust IoT platforms, data management and security, are of major concern while considering an IoT implementation. The aim of this article is to highlight some critical factors enterprises need to consider for a successful IoT implementation.

With IoT connecting things, enterprises should consider the security of the devices and communications as the top of the priority chain. Unauthorized intrusion or manipulation of devices through control logic or physical defects may result in serious damages. To avoid these issues, it is imperative to make the IoT system secure from the ground up, whether you are connecting simple pressure sensors or complex factory equipment with thousands of elements inside them. Microsoft developed a threat classification model called STRIDE (Spoofing, Tampering, Repudiation, Information Disclosure, Denial of Service and Elevation of Privilege) that provides a mnemonic device for security threats.

According to IDC Research, 90% of organizations that implement IoT will go through an IoT-based breach at the back-end system before 2018. Keeping this in mind, enterprises should secure their IoT infrastructure, considering data security in the cloud, secure provisioning of devices, and protecting data integrity over public internet before an IoT implementation, as it becomes difficult to add safety features to the system later.

When it comes to handling data, one needs to be sensitive to its acquisition and usage. Enterprises need to have answers to difficult questions, such as what data does assets collect? Where do we store them? How is it accessed by anyone? Do we need to add identity access and security management layers on top of it? How will the other integrated system use the data? 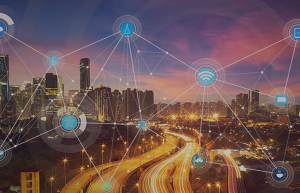 Data sensitivity is a critical factor that needs to be considered carefully to make your IoT-based connected enterprise implementation successful.

As enterprises record growth, they will be adding in more machines, devices and data. Therefore, an IoT system has to be scalable to ensure that it can easily accommodate new machines/devices and handle the increasing data load without any glitches. Adding scalability capabilities after the entire IoT system is built would not be an efficient way to go about things. Many IoT platforms, like the Microsoft Azure IoT platform, provide auto-scalability capabilities to build a cost-efficient and robust IoT system, enabling enterprises to be ready to scale their machines and devices up or down as per the business need.

IoT implementation does not just mean connecting the devices and machines to the internet. Intelligence needs to be added to fully realize the true value of IoT. Enterprises should think of utilizing machine-generated data for actionable insights and to gain practical benefits. For instance, automatic shutdown of a smart water meter, once it exceeds a threshold value set for a day, would yield some real-world benefits. For a successful and powerful IoT implementation, connectivity isn’t just enough; enterprises need to consider adding a few new capabilities and functionalities like artificial intelligence or predictive analytics.

The majority of IoT systems fail because of a major communication challenge. The communication protocol between machine-to-machine and machine-to-IoT platform, especially in case of legacy assets, needs to be considered beforehand. This will help overcome the possible chances of an IoT system that is unable to fulfill the communication gap. Ensuring an IoT system being implemented is capable of communicating over a wide range of file transfer protocols, as well as various types of equipment, is a necessity.

The aforementioned points are critical for enterprises to avoid major pitfalls during the development and deployment of an IoT system. Companies are investing millions in IoT, but the majority of the revenue is resulting in no ROI due to persistent issues that plague the system for prolonged periods.

Azure IoT consulting partners can help enterprises successfully implement IoT, right from architecting the system to its deployment on Azure — with all these critical factors taken into consideration. For an example, read how a U.S.-based instrumentation giant adopted a scalable and cost-efficient IIoT platform to connect more than 100 enterprise gateways that handle more than 3,000 end devices and manage over 1 million data records per year to generate real-time analytics for end customers.