Organizations need flexible, cheap storage that performs well. It might seem like too much to ask, but it's possible with advances in storage technologies.

These data storage trends for 2023 cover ways vendors are working on improvements, as well as customer attitudes toward how they store data.

1. Storage as a service

The basic idea behind storage as a service is that major vendors offer cloudlike pricing for storage resources located in an organization's own data center. Instead of paying a hefty upfront price for an enterprise storage array, organizations can opt for consumption-based pricing instead.

Although CXL is first and foremost a memory interconnect standard, it will undoubtedly prove useful for high-performance storage. Earlier this year, for example, Samsung announced a CXL-based SSD, which the vendor said will improve random read performance by about 1,900% over existing SSDs, particularly those that are not equipped with DRAM. 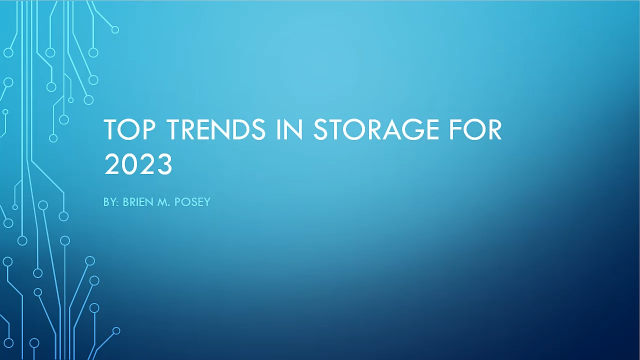 Organizations increasingly view their IT operations through the lens of sustainability -- storage is part of that movement. In addition to the environmental benefits, this data storage trend also helps organizations to decrease their power consumption. As a result, organizations save money, especially given that electricity is usually the single biggest expense for a data center.

Tape is one example of storage media that does not use a lot of energy, especially when cartridges are simply sitting on a shelf. While the sustainability trend has been going on for a while, it is unlikely to slow down in 2023.

Early on, it seemed that storage was going to become more expensive in 2022. More recently, however, storage prices have been steadily declining. These price declines apply to both SSDs and HDDs.

The onset of the pandemic in 2020 caused a huge spike in the demand for solid state storage. Manufacturers ramped up production to keep pace with the demand. However, the demand eventually waned, leaving manufacturers with unsold inventory. This excess inventory has directly contributed to falling SSD prices. A surplus in NAND memory also fuels price drops.

At the same time, HDD shipments fell by about 13.9% in the third quarter of 2022, according to Forbes. Much of this decrease stems from organizations -- and even cloud providers -- choosing SSDs over HDDs.

Despite hyperscale cloud providers' best efforts to convince the world to move all their data to the cloud, the repatriation trend seems to be speeding up. Organizations are increasingly keeping data on premises or moving data from the cloud back into their own data centers.

Early on, cloud providers did a great job of convincing customers that the cloud was a cheaper alternative to hosting workloads on premises. In many cases, however, these savings have failed to materialize and under the right circumstances it might even be more expensive to host a workload in the cloud. Not surprisingly, some companies are beginning to repatriate their data to gain more control over their spending.

In addition, organizations generate a lot of data at the edge. Depending on the volume and how IT uses that data, it does not always make sense to send the data to the cloud.

The "cloud good, on premises bad" mindset is starting to change. In 2023, IT will likely see even more organizations move some of their cloud data back on site.

3 data protection and governance predictions for 2023