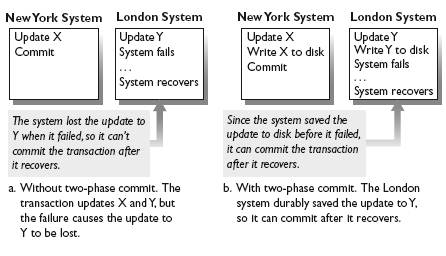 FIGURE 1.7 How Two-Phase Commit Ensures Atomicity. With two-phase commit, each system durably stores its updates before the transaction commits, so it can commit the transaction when it recovers.

For more information on this title

This is an excerpt from Principles of Transaction Processing by Philip Bernstein and Eric Newcomer. Printed with permission from Morgan Kaufmann, a division of Elsevier. Copyright 2009.

Two -phase commit avoids the problem in Figure 1.7(a) because all resource managers have a durable copy of the transaction's updates before any of them commit. Therefore, even if a system fails during the commitment activity, as the London system did in the figure, it can commit the transaction after it recovers. However, to make this all work, the protocol must handle every possible failure and recovery scenario. For example, in Figure 1.7(b) , it must tell the London system to commit the transaction. The details of how two-phase commit handles all these scenarios is described in Chapter 8.

Two -phase commit is required whenever a transaction accesses two or more resource managers. Thus, one key question that designers of TP applications must answer is whether or not to distribute their transaction programs among multiple resources. Using two-phase commit adds overhead (due to two-phase commit messages), but the option to distribute can provide better scalability (adding more systems to increase capacity) and availability (since one system can fail while others remain operational).

Performance is a critical aspect of TP systems. No one likes waiting more than a few seconds for an automated teller machine to dispense cash or for a hotel web site to accept a reservation request. So response time to end-users is one important measure of TP system performance. Companies that rely on TP systems, such as banks, airlines, and commercial web sites, also want to get the most transaction throughput for the money they invest in a TP system. They also care about system scalability; that is, how much they can grow their system as their business grows.

It's very challenging to configure a TP system to meet response time and throughput requirements at minimum cost. It requires choosing the number of systems, how much storage capacity they'll have, which processing and database functions are assigned to each system, and how the systems are connected to displays and to each other. Even if you know the performance of the component products being assembled, it's hard to predict how the overall system will perform. Therefore, users and vendors implement benchmarks to obtain guidance on how to configure systems and to compare competing products.

Vendor benchmarks are defined by an independent consortium called the Transaction Processing Performance Council (TPC; www.tpc.org). The benchmarks enable apples-to-apples comparisons of different vendors' hardware and software products. Each TPC benchmark defines standard transaction programs and characterizes a system's performance by the throughput that the system can process under certain workload conditions, database size, response time guarantees, and so on. Published results must be accompanied by a full disclosure report, which allows other vendors to review benchmark compliance and gives users more detailed performance information beyond the summary performance measures.

As an aside, Internet web sites usually measure 90% and 99% response times. Even if the average performance is fast, it's bad if one in a hundred transactions is too slow. Since customers often run multiple transactions, that translates into several percent of customers receiving poor service. Many such customers don't return.

The definitions of TPC benchmarks are worth understanding to enable one to interpret TPC performance reports. Each of these reports, published on the TPC web site, is the result of a system benchmark evaluation performed by a system vendor and subsequently validated by an independent auditor. Although their main purpose is to allow customers to compare TP system products, these reports are also worth browsing for educational reasons, to give one a feel for the performance range of state-of-the-art systems. They are also useful as guidance for the design and presentation of a custom benchmark study for a particular user application.

The first two benchmarks promoted by TPC, called TPC-A and TPC-B, model an ATM application that debits or credits a checking account. When TPC-A/B were introduced, around 1989, they were carefully crafted to exercise the main bottlenecks customers were experiencing in TP systems. The benchmark was so successful in encouraging vendors to eliminate these bottlenecks that within a few years nearly all database systems performed very well on TPC-A/B. Therefore, the benchmarks were retired and replaced by TPC-C in 1995. Still, it's instructive to look at the bottlenecks the benchmarks were designed to exercise, since these bottlenecks can still arise today on a poorly designed system or application.

In TPC-A/B, the database consists of:

FIGURE 1.10 TPC-A/B Transaction Program. The program models a debit/credit transaction for a bank.

The transaction reads a 100-byte input message, including the account number and amount of money to withdraw or deposit. The transaction uses that input to find the account record and update it appropriately. It updates the history file to indicate that this transaction has executed. It updates the teller and bank branch records to indicate the amount of money deposited or withdrawn at that teller and bank branch, respectively. Finally, for TPC-A, it sends a message back to the display device to confirm the completion of the transaction.

The benchmark exercises several potential bottlenecks on a TP system:

Given a fixed configuration, the performance and price/performance of any TP application depends on the amount of computer resources needed to execute it: the number of processor instructions, I/Os to stable storage, and communications messages. Thus, an important step in understanding the performance of any TP application is to count the resources required for each transaction. In TPC-A/B, for each transaction a high performance implementation uses a few hundred thousand instructions, two or three I/Os to stable storage, and two interactions with the display. When running these benchmarks, a typical system spends more than half of the processor instructions inside the database system and maybe another third of the instructions in message communications between the parts of the application. Only a small fraction of the processor directly executes the transaction program. This isn't very surprising, because the transaction program mostly just sends messages and initiates database operations. The transaction program itself does very little, which is typical of many TP applications.

The TPC-C benchmark was introduced in 1992. It is based on an order-entry application for a wholesale supplier. Compared to TPC-A/B, it includes a wider variety of transactions, some "heavy weight" transactions (which do a lot of work), and a more complex database.

The database centers around a warehouse, which tracks the stock of items that it supplies to customers within a sales district, and tracks those customers' orders, which consist of order-lines . The database size is proportional to the number of warehouses (see Table 1.1 ).

Table 1.1 Database for the TPC-C Benchmark. The database consists of the tables in the left column, which support an order-entry application

There are five types of transactions:

The TPC-C workload is many times heavier per transaction than TPC-A/B and exhibits higher contention for shared data. Moreover, it exercises a wider variety of performance-sensitive functions, such as deferred transaction execution, access via secondary keys, and transaction aborts. It is regarded as a more realistic workload than TPC-A/B, which is why it replaced TPC-A/B as the standard TP systems benchmark.

The TPC-E benchmark was introduced in 2007. Compared to TPC-C, it represents larger and more complex databases and transaction workloads that are more representative of current TP applications. And it uses a storage configuration that is less expensive to test and run. It is based on a stock trading application for a brokerage firm where transactions are related to stock trades, customer inquiries, activity feeds from markets, and market analysis by brokers. Unlike previous benchmarks, TPC-E does not include transactional middleware components and solely measures database performance.

TPC-E includes 10 transaction types, summarized in Table 1.2 , which are a mix of read-only and read-write transactions. For each type, the table shows the percentage of transactions of that type and the number of database tables it accesses, which give a feeling for the execution cost of the type.

There are various parameters that introduce variation into the workload. For example, trade requests are split 50-50 between buy and sell and 60-40 between market order and limit order. In addition, customers are assigned to one of three tiers, depending on how often they trade securities — the higher the tier, the more accounts per customer and trades per customer.

The database schema has 33 tables divided into four sets: market data (11 tables), customer data (9 tables), broker data (9 tables), and static reference data (4 tables). Most tables have fewer than six columns and less than 100 bytes per row. At the extremes, the Customer table has 23 columns, and several tables store text information with hundreds of bytes per row (or even more for the News Item table).

A driver program generates the transactions and their inputs, submits them to a test system, and measures the rate of completed transactions. The result is the measured transactions per second (tpsE), which is the number of Trade Result transactions executed per second, given the mix of the other transaction types. Each transaction type has a response time limit of one to three seconds, depending on transaction type. In contrast to TPC-C, application functions related to front-end programs are excluded. Thus, the results measure the serverside database management system. Like previous TPC benchmarks, TPC-E includes a measure for the cost per transaction per second ($/tpsE).

TPC-E provides data generation code to initialize the database with the result of 300 days of initial trading, daily market closing price information for five years, and quarterly company report data for five years. Beyond that, the database size scales up as a function of the nominal tpsE, which is the transaction rate the benchmark sponsor is aiming for . The measured tpsE must be within 80 to 102% of the nominal tpsE. The database must have 500 customers for each nominal tpsE. Other database tables scale relative to the number of customer rows. For example, for each 1000 Customers, there must be 685 Securities and 500 Companies. Some tables include a row describing each trade and therefore grow quite large for a given run.

Compared to TPC-C, TPC-E is a more complex workload. It makes heavier use of SQL database features, such as referential integrity and transaction isolation levels (to be discussed in Chapter 6). It uses a more complex SQL schema. Transactions execute more complex SQL statements and several of them have to make multiple calls to the database, which cannot be batched in one round-trip. And there is no trivial partitioning of the database that will enable scalability (to be discussed in Section 2.6). Despite all this newly introduced complexity, the benchmark generates a much lower I/O load than TPC-C for a comparable transaction rate. This makes the benchmark cheaper to run, which is important to vendors when they run high-end scalability tests where large machine configurations are needed.

Download a free PDF of this chapter: Principles of Transaction Processing, Second Edition

To purchase the book or similar titles, visit the Elsevier website