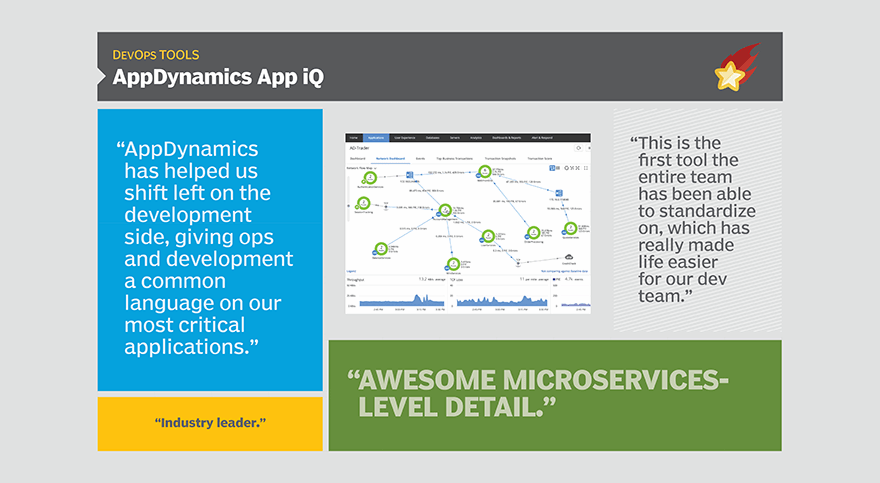 The development of AppDynamics App iQ platform reflects broad trends in enterprise DevOps tools in the past year, from a renewed focus on monitoring IT apps and infrastructure to pushing the envelope of analytics-based automation.

The company kicked off a busy year of tech industry headlines in January when it was acquired for a cool $3.7 billion by Cisco Systems, as AppDynamics stood on the verge of a blockbuster initial public offering.

The company's momentum is based on its popularity among enterprise customers, such as Hallmark, eBay, Expedia, Carhartt, United Airlines, CarMax and others. It also reflects a strong focus on business value within the AppDynamics product line, which correlates technical metrics with business outcomes.

"AppDynamics has helped us shift left on the development side, giving ops and development a common language on our most critical applications," said one of our Impact Awards voters.

The application of advanced analytics with machine learning capabilities to IT operations, known as AIOps, was also a dominant trend in the DevOps world this year. AppDynamics is a longtime proponent of AIOps, and could be the product to beat in 2018 if plans for automated root-cause analysis and predictive analytics features the company previewed at its annual AppDynamics Summit come to fruition. Cisco has big plans to fold AppDynamics App iQ platform in with its network infrastructure and security tools, reflecting the broadening focus of DevOps to include software-defined networks and DevSecOps practices. A further DevOps monitoring acquisition, Perspica, which brings wire-speed analytics into the Cisco fold, will also up the ante for DevOps monitoring in 2018.

"When we look back at 2018, we'll see a separation between the leaders and the laggards in DevOps monitoring," said Stephen Elliot, analyst at IDC. "It isn't just what kind of analytics companies are developing, and whether they have patents to show they're unique -- it will also depend on the breadth and depth of data they can collect."

All this is a sign DevOps in enterprise IT shops has matured beyond test and development environments to take on more critical production workloads, Elliot said. "It's a sign companies are realizing they still need monitoring. There might have been some hope they needed less investment in this area with IT automation, but they actually probably need more," Elliot said. "It's becoming more and more important with multi-cloud adoption to have broader process management and data collection, as well as analytics."