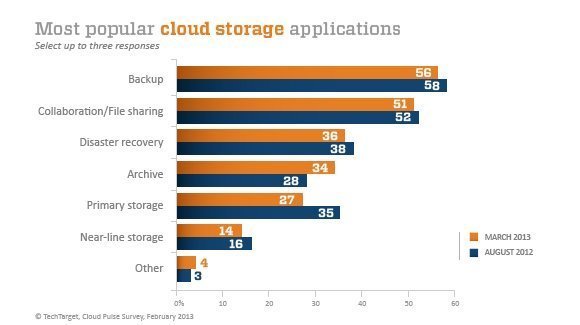 Among cloud storage applications, backup still dominates -- 56% of the cloud storage users we surveyed in the latest TechTarget Cloud Pulse Survey are cloud data backup subscribers. That's slightly fewer than we saw in our October 2012 survey, but still an impressive number when you consider that cloud backup services have only recently matured to the extent that midsize and larger companies can confidently rely on them.

Disaster recovery (DR) is often considered a "killer app" among cloud applications; when combined with the ability to use server virtualization to spin up servers in the cloud as needed, it provides a very cost-effective recovery site scenario that's within the reach of most companies' IT budgets. Thirty-six percent of those surveyed tap into the cloud as part of a DR arrangement.

The number of companies using cloud storage as a core part of their backup and DR operations isn't all that surprising, but the high percentage -- 51% -- of cloud storage users who leverage file sync-and-share cloud storage applications is an eye-opener. Enterprise-worthy versions of sync-and-share services are just beginning to appear, but a lot of mobile workers have been leveraging consumer sync-and-share services to access their work from anywhere using devices like smartphones and tablets. It's a hot-button issue for many companies looking to retain control of their intellectual property, with some piloting in-house sync-and-share systems such as those offered by EMC's Syncplicity and Druva's inSync Share.

The Cloud Pulse survey was conducted in March 2013. A total of 1,297 responses were collected representing a broad variety of industries, with business services/consulting (20%), computer software (15%), education (9%), manufacturing (7%) and government (6%) among the largest participating verticals. Companies responding to the cloud storage survey had an average annual revenue of $1.9 billion and averaged more than 3,500 employees.

Cloud storage implementation accounts for a big chunk of cloud computing activities; 44% of cloud users said they use the public cloud for storage and another 18% cited DR as a key public cloud application.