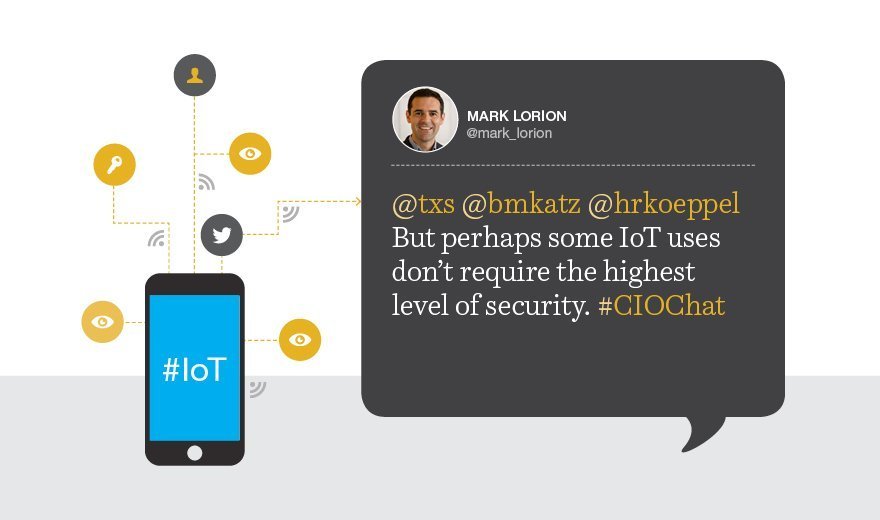 Is all data created equal?

During our discussion on IoT privacy and security, Apperian Inc. chief marketing officer Mark Lorion suggested that not all IoT data requires the same degree of security. For example, medical, financial or even geographic data likely requires a higher level of security than pedometer data or the like. Hacking an IoT-enabled insulin pump can seriously endanger the physical safety of a user, whereas hacking a FitBit cannot.

Brian Katz, director of EUC Mobility Strategy at VMware, responded to Lorion by further stressing the idea that not all data is created equal -- especially when it comes to IoT data:

@bmkatz @hrkoeppel @txs Agree. And let users determine what it's worth. #CIOChat

Who owns the (IoT) data?

Letting users decide what their data is worth helps put control back in their hands, but is it their data to control? Does the organization capturing or storing the data have a right to it? Participants -- including Forrester analyst Tyler Shields -- debated the subject of data ownership:

a3. Companies can't assume that they have rights to all of a user's data for wearables for example…user owns that data #CIOchat

@bmkatz @searchCIO #CIOChat Why can't they? There is no law against it and little business risk. (not advocating it.. just saying)

Forrester analyst Eve Maler put it differently when speaking to SearchCIO about companies' data ownership expectations: "It's as though companies are automatically granted access to consumers' personal data by virtue of their privileged position, versus consumers controlling the information that is sharable."

For further discussion on who owns the economic value of user-generated data, check out SearchCIO's coverage of Uber's updated privacy policy.