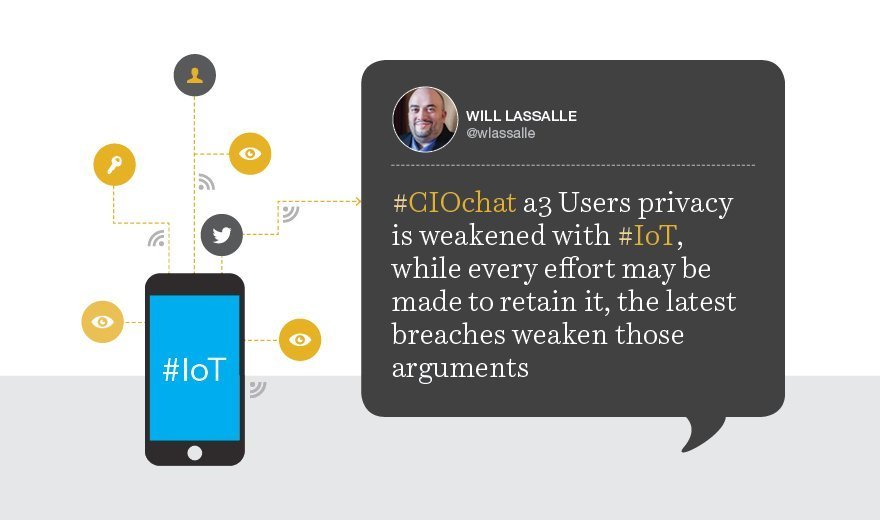 According to Will Lassalle, CIO at JLS Technology USA, and several other SearchCIO followers, IoT technology poses a threat to privacy as we know it, especially given the growing frequency of data breaches. Market research firm IDC agreed that a rocky road is ahead for IoT-based technology, predicting that within two years 90% of all IT networks will have an IoT-based security breach. A 2014 HP Security Research report also found that 80% of the IoT devices they examined raised privacy concerns.

Those figures don't inspire much confidence in IoT privacy, but should we anticipate a high level of privacy to begin with given the nature of the technology and our increasingly digital culture? Amrit Williams DePaulo, CTO at CloudPassage, gave his take on the matter:

A3 There is no privacy and there should be no expectation of such...we, as a society, gave that up already #CIOchat

Forrester Research Inc. analyst Tyler Shields suggests a "generational shift" has occurred, in which younger citizens are willing to give up more privacy in exchange for the convenience that comes with IoT devices and technology. SearchCIO's Nicole Laskowski chimed in:

Most recently, Uber came under fire for its change in privacy policy that allows the company to collect user location data even when the smartphone app is not in use. As companies continue to develop specific policies around IoT privacy, the convenience vs. privacy debate will likely intensify.

Brian Katz, director of EUC Mobility Strategy at VMware, said privacy is still important, even in an IoT-enriched world:

Next steps: A column on the recent Ashley Madison hack also highlights the abating state of consumer privacy in a breach-laden world, and why users and businesses should be vigilant.