“I hope most of you in this room would agree knowing what you know about data and how to read data, the impacts of Harvey, Irma and Maria send us straight forward global messages,” he said. “This is the moment to make a full and unambiguous commitment to the Paris Agreement. Not a moment to retreat from it. If we fail to take action now, the price tag of inaction will be enormous. It’s already becoming enormous.”

During his Veritas Vision 2017-opening keynote, Branson emphasized how access to information is crucial when dealing the destructive forces of nature.

“Through this time of crisis, the importance of information has become very, very clear. As communication and information collapsed, we went from the 21st Century to the 19th Century in a matter of hours,” Branson said. 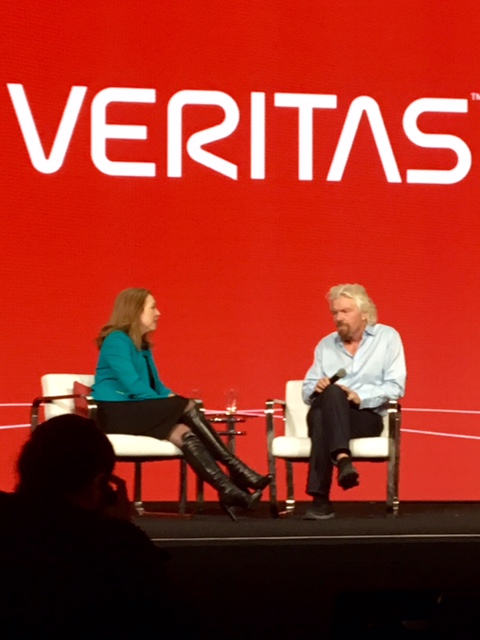 Branson spoke weeks after Hurricane Irma destroyed his home on Necker Island, which is part of the British Virgin Islands. The Category 5 hurricane featured winds that reached 185 mph and destroyed several Caribbean Islands before reaching Florida.

“When infrastructure fails, it makes communication almost impossible. Even the most basic coordination becomes difficult,” he said. “We saw that first-hand when organizing aid, transportation and fuel.”

Information, Branson said, is also under assault. In politics and in business, data and information needs to be correctly used. We are living in a time where more data is available to global communities in real-time. Veritas Vision 2017 speakers noted that 2.5 quintillion bytes of data are now produced daily.

“We tend to take our access to information for granted, yet we are not doing enough to protect it,” he said. “As is often quoted, around 90 percent of the data today has been created in the last two years alone. But there is reason to be wary, data information and fact are not interchangeable terms.”

Pointing to what he called unethical business practices and shady political decision-making processes, Branson told the Veritas Vision 2017 audience that the truth is often harder to find than ever before. So it’s up to us to confront this challenge as governments, as individuals and as businesses.

“And brands are built on information and in depth understanding of the market, your competitors market and your customers. Having access to information at the right moment is a huge part of that. It allows entrepreneurs to know when to take risks and how to make decision. That is what disruption is all about.”

Branson has called for a Marshall Plan to rebuild Caribbean islands to better withstand hurricanes and also to more us away from fossil fuel dependency. He wants to build more energy efficient infrastructure and make better use of the Caribbean’s natural wind and solar resources.

“As an investor and entrepreneur, I don’t see any downside to that,” he said. “And as our corner of the world is subjected to nature’s fury, I can’t help but ask how much more disruption is needed to show that the way we treat our planet is having serious, serious consequences.

“Scientists have highlighted (the danger) carbon emissions and ocean surface temperatures,” Branson said. “When Irma struck, the Atlantic and Caribbean water reached temperatures of 86 degrees Fahrenheit in some places and as people and in Houston, Florida and across the BVI would agree and I suspect by this morning, Puerto Rico as well, the time to act is now.”