Download and read "Identifying Issues in a Multisite Deployment" in its entirety.

This chapter will explain the issues that can arise in a multisite Cisco UC Manager deployment, and recommend specific solutions.

IP networks were not originally designed to carry real-time traffic; instead, they were designed for resiliency and fault tolerance. Each packet is processed separately in an IP network, sometimes causing different packets in a communications stream to take different paths to the destination. The different paths in the network may have a different amount of packet loss, delay, and delay variation (jitter) because of bandwidth, distance, and congestion differences. The destination must be able to receive packets out of order and resequence these packets. This challenge is solved by the use of Real-Time Transport Protocol (RTP) sequence numbers and traffic resequencing. When possible, it is best to not rely solely on these RTP mechanisms. Proper network design, using Cisco router Cisco Express Forwarding (CEF) switch cache technology, performs per-destination load sharing by default. Per-destination load sharing is not a perfect load-balancing paradigm, but it ensures that each IP flow (voice call) takes the same path.

Bandwidth is shared by multiple users and applications, whereas the amount of bandwidth required for an individual IP flow varies significantly during short lapses of time. Most data applications are very bursty, whereas Cisco real-time audio communications with RTP use the same continuous-bandwidth stream. The bandwidth available for any application, including CUCM and voice-bearer traffic, is unpredictable. During peak periods, packets need to be buffered in queues waiting to be processed because of network congestion. Queuing is a term that anyone who has ever experienced air flight is familiar with. When you arrive at the airport, you must get in a line (queue), because the number of ticket agents (bandwidth) available to check you in is less than the flow of traffic arriving at the ticket counters (incoming IP traffic). If congestion occurs for too long, the queue (packet buffers) gets filled up, and passengers are annoyed (packets are dropped). Higher queuing delays and packet drops are more likely on highly loaded, slow-speed links such as WAN links used between sites in a multisite environment. Quality challenges are common on these types of links, and you need to handle them by implementing QoS. Without the use of QoS, voice packets experience delay, jitter, and packet loss, impacting voice quality. It is critical to properly configure Cisco QoS mechanisms end to end throughout the network for proper audio and video performance.

During peak periods, packets cannot be sent immediately because of interface congestion. Instead, the packets are temporarily stored in a queue, waiting to be processed. The amount of time the packet waits in the queue, called the queuing delay, can vary greatly based on network conditions and traffic arrival rates. If the queue is full, newly received packets cannot be buffered anymore and get dropped (tail drop). Figure 1-1 illustrates tail drop. Packets are processed on a first in, first out (FIFO) model in the hardware queue of all router interfaces. Voice conversations are predictable and constant (sampling is every 20 milliseconds by default), but data applications are bursty and greedy. Voice therefore is subject to degradation of quality because of delay, jitter, and packet loss. 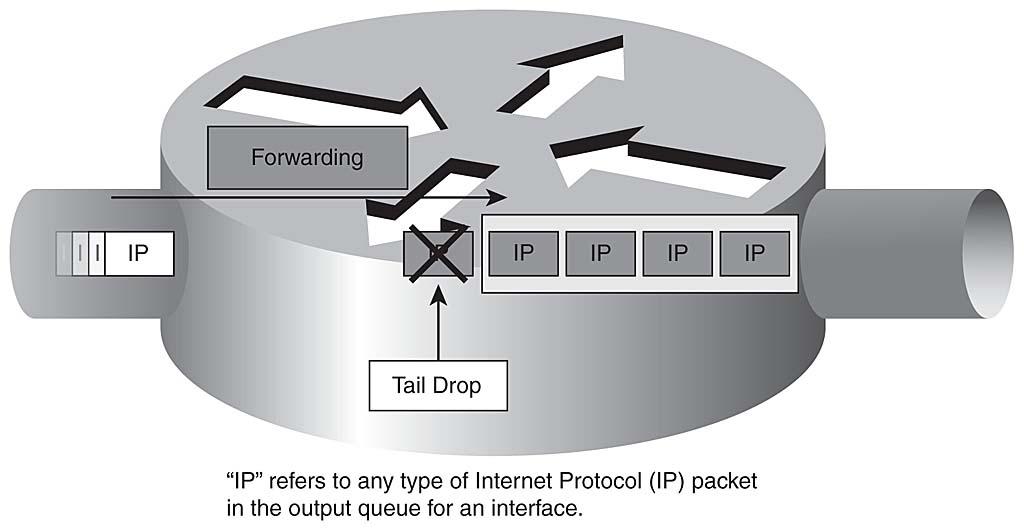 Each site in a multisite deployment usually is interconnected by an IP WAN, or occasionally by a metropolitan-area network (MAN) such as Metro Ethernet. Bandwidth on WAN links is limited and relatively expensive. The goal is to use the available bandwidth as efficiently as possible. Unnecessary traffic should be removed from the IP WAN links through content filtering, firewalls, and access control lists (ACL). IP WAN acceleration methods for bandwidth optimization should be considered as well. Any period of congestion could result in service degradation unless QoS is deployed throughout the network.

Voice streams are constant and predictable for Cisco audio packets. Typically, the G.729 codec is used across the WAN to best use bandwidth. As a comparison, the G.711 audio codec requires 64 kbps, whereas packetizing the G.711 voice sample in an IP/UDP/RTP header every 20 ms requires 16 kbps plus the Layer 2 header overhead. 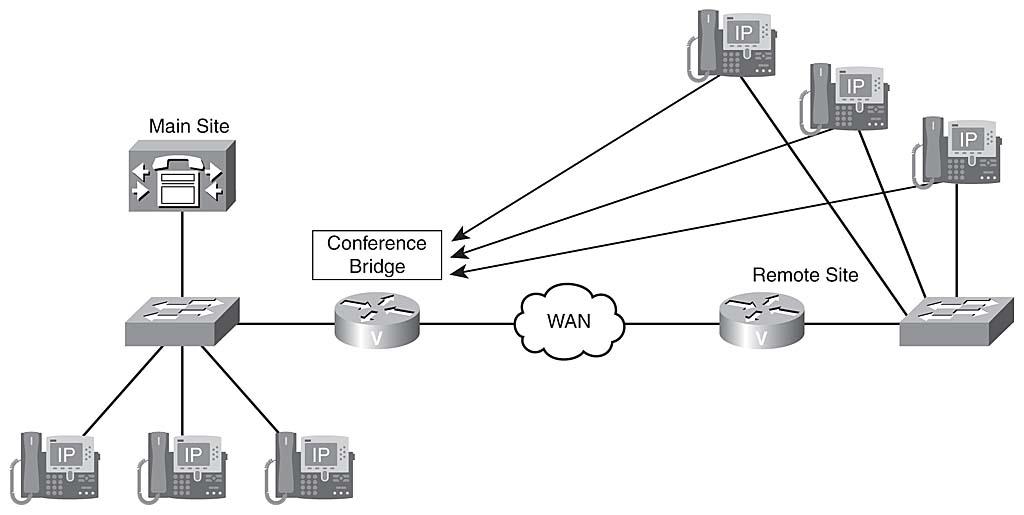 Centralized conference resources cause bandwidth, delay, and capacity challenges in the voice network. Each G.711 RTP stream requires 80 kbps (plus the Layer 2 overhead), resulting in 240 kbps of IP WAN bandwidth consumption by this voice conference. If the conference bridge were not located on the other side of the IP WAN, this traffic would not need to traverse the WAN link, resulting in less delay and bandwidth consumption. If the remote site had a CUCM region configuration that resulted in calls with the G.729 codec back to the main site, the software conferencing resources of CUCM would not be able to mix the audio conversations. Hardware conferencing or hardware transcoder media resources in a voice gateway are required to accommodate G.729 audio conferencing. Local hardware conference resources would remove this need. All centrally located media resources (Music On Hold [MOH], annunciator, conference bridges, videoconferencing, and media termination points) suffer similar bandwidth, delay, and resource exhaustion challenges.

When deploying CUCM in multisite environments, centralized CUCM-based services are accessed over the IP WAN. Affected services include the following:

Figure 1-3 shows a Unified Communications network in which the main site is connected to a remote site through a centralized call-processing environment. The main site is also connected to a remote cluster through an intercluster trunk (ICT) representing a distributed call processing environment. The combination of both centralized and distributed call processing represents a hybrid call-processing model in which small sites use the CUCM resources of the main site, but large remote offices have their own CUCM cluster. On the bottom left of Figure 1-3 is a SIP trunk, typically over a Metro Ethernet connection to an Internet Telephony Service Provider (ITSP). The benefit of the SIP trunk is that the ITSP provides the gateways to the PSTN instead of your providing gateways at the main site.

An IP WAN outage in Figure 1-3 will cause an outage of call-processing services for the remote site connected in a centralized fashion. The remote cluster will not suffer a call-processing outage, but the remote cluster will not be able to dial the main site over the IP WAN during the outage. Mission-critical voice applications (voice mail, interactive voice response [IVR], and so on) located at the main site will be unavailable to any of the other sites during the WAN outage.

If the ITSP is using the same links that allow IP WAN connectivity, all calls to and from the public switched telephone network (PSTN) will also be unavailable.

A deployment like the one shown in Figure 1-3 is considered badly designed because of the lack of IP WAN and PSTN backup.

In a multisite deployment, with a single or multiple CUCM clusters, dial plan design requires the consideration of several issues that do not exist in single-site deployments:

In Figure 1-4, Cisco IP Phones at the main site use directory numbers 1001 to 1099, 2000 to 2157, and 2365 to 2999. At the remote site, 1001 to 1099 and 2158 to 2364 are used. These directory numbers have two issues. First, 1001 to 1099 overlap; these directory numbers exist at both sites, so they are not unique throughout the complete deployment. This causes a problem: If a user in the remote site dialed only the four digits 1001, which phone would ring? This issue of overlapping dial plans needs to be addressed by digit manipulation. In addition, the nonconsecutive use of the range 2000 to 2999 (with some duplicate numbers at the two sites) would require a significant number of additional entries in call-routing tables because the ranges can hardly be summarized by one (or a few) entries. 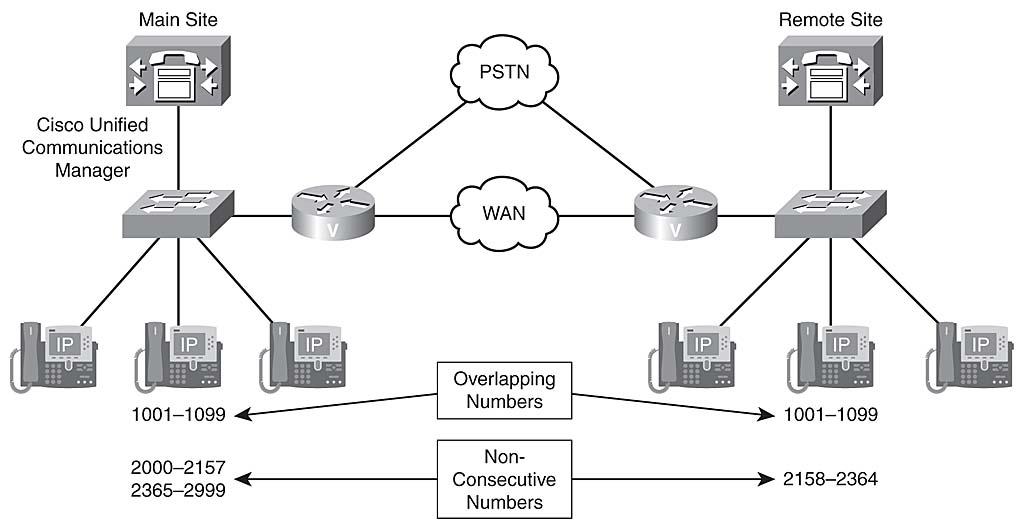 Variable-length numbering, E.164 addressing and DID 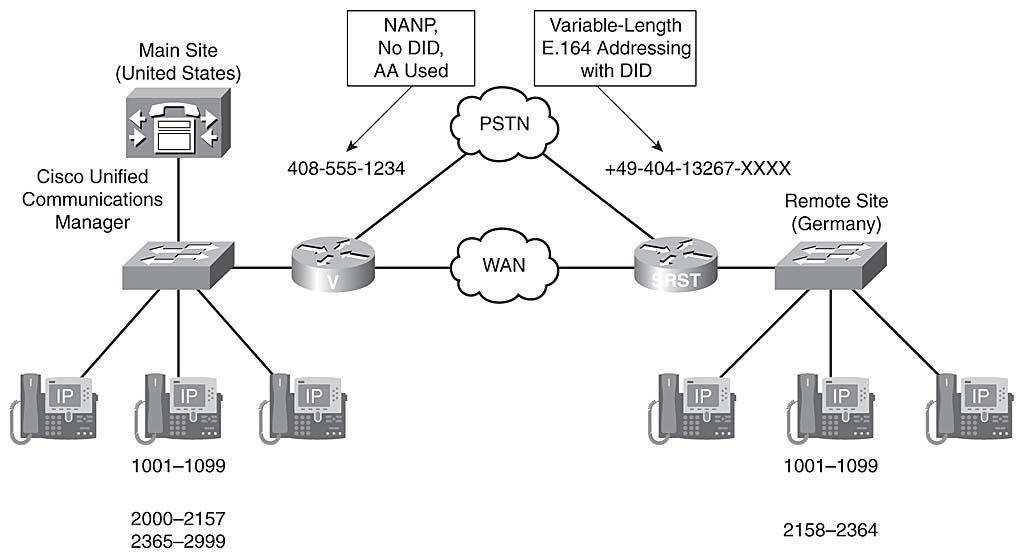 The logic of routing calls by CUCM over the WAN or through the PSTN is appropriately transparent to the phone user.

There are two ways to save costs for PSTN calls in a multisite deployment:

In the example shown in Figure 1-6, a call from Chicago to San Jose would be routed as follows: 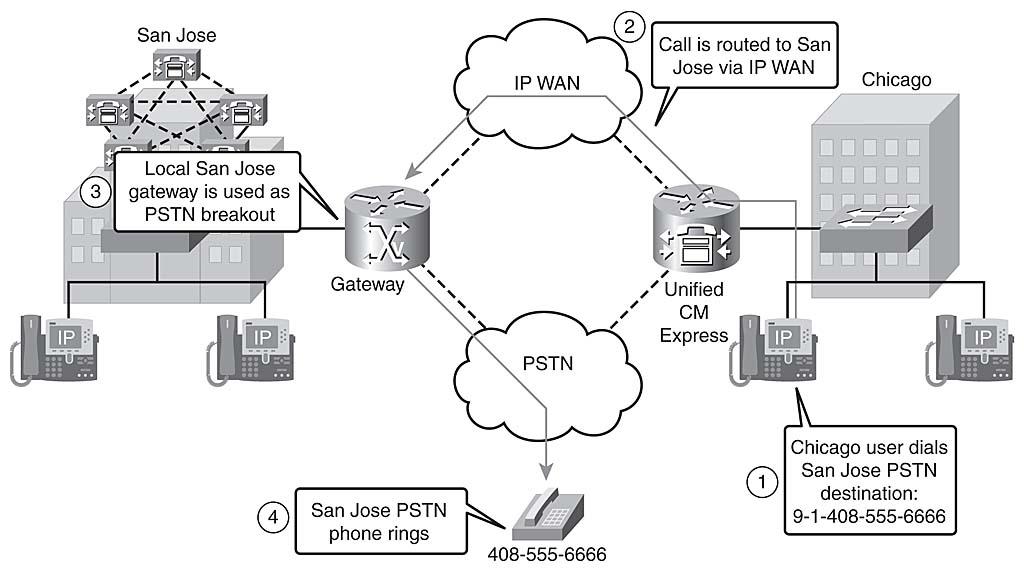 If the WAN were unavailable for any reason before the call, the Chicago Gateway would have to be properly configured to route the call with the appropriate digit manipulation through the PSTN at a potentially higher toll cost to the San Jose PSTN phone.

In single-site deployments, CUCM servers and IP Phones usually use private IP addresses because there is no need to communicate with the outside IP world. NAT is not configured for the phone subnets, and attacks from the outside are impossible. In multisite deployments, however, IP Security (IPsec) virtual private network (VPN) tunnels can be used between sites. The VPN tunnels allow only intersite communication; access to the protected internal networks is not possible from the outside—only from the other site through the tunnel. Therefore, attacks from the outside are blocked at the gateway. To configure IPsec VPNs, the VPN tunnel must be configured to terminate on the two gateways in the different sites. Sometimes this is not possible; for instance, the two sites may be under different administration, or perhaps security policies do not allow the configuration of IPsec VPNs.

In such a case, or when connecting to a public service such as an ITSP, NAT has to be configured for CUCM servers and IP Phones. Cisco calls this Hosted NAT Traversal for Session Border Controllers.

As soon as CUCM servers and IP Phones can be reached with public IP addresses, they are subject to attacks from the outside world, introducing potential security issues. 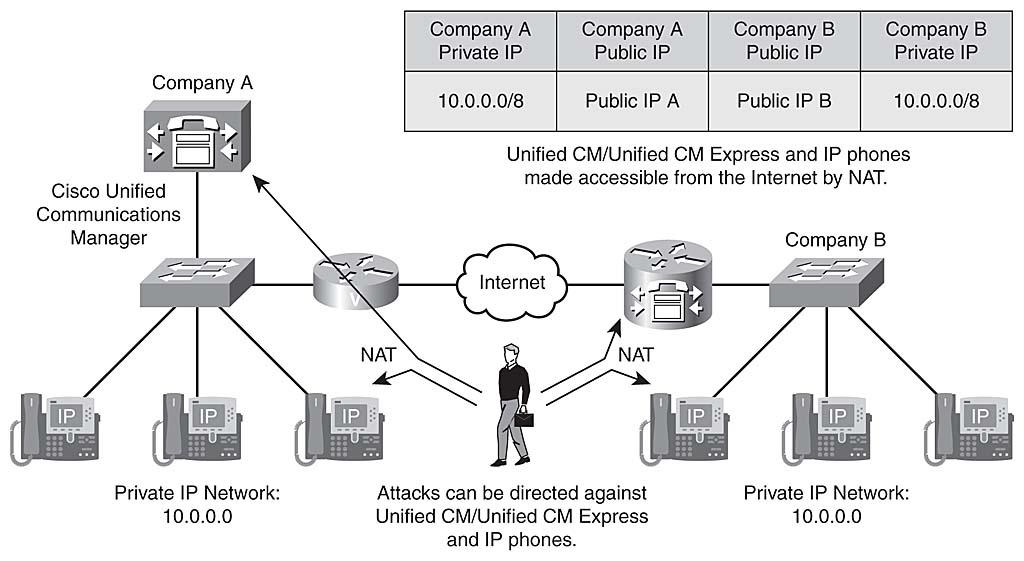 Download and read "Identifying Issues in a Multisite Deployment" in its entirety.