Plug-ins can be a real boost to your VMware architecture. Introduced with VMware ESX Server 3.5 and VMware Infrastructure Client (VI Client) 2.5, they can expand the range of functionality in your virtual environment. In this article, I'll discuss plug-in options and plug-in management. If you aren't already using plug-ins, you soon will be.

What is a VMware Plug-in?

A VMware plug-in is an addition to the VMware software that interacts with VirtualCenter to provide enhanced features. As plug-ins are independent of the base software, they can be upgraded independently and they can be installed from anywhere on the VI3 network. They consist of two major parts: the server component and the client component, with the server component being installed prior to using the client component. For a lengthier description, see the VMware Infrastructure Online Library – ESX Server 3 Edition.

Plug-ins provide a lot of power to VMware Administrators by expanding the functionality of VirtualCenter and the VI Client. Plug-ins can:

Plug-ins either come from VMware directly or may be released from 3rd party plug-in vendors. Developers can create their own plug-ins if they are willing to write code. Examples of VMware plug-ins are the VMware Update Manager and VMware Converter Enterprise.

The VI Client Console plug-in integrates an SSH console directly into the client.

The Invoke plug-in makes it possible to integrate third-party applications with the client while persisting login information.

While currently a little rough on the installation and documentation, the Juxtaposition RDP plug-in offers the easiest and quickest way to RDP to a virtual machine in your VMware Virtual Infrastructure.

To install it, I downloaded the ZIP file, unzipped it, and put the extracted files inside C:\Program Files\VMware\Infrastructure\Virtual Infrastructure Client\Plug-ins. From there, I started my VI Client and went up to the Plug-ins drop-down menu and clicked on Manage Plug-ins. 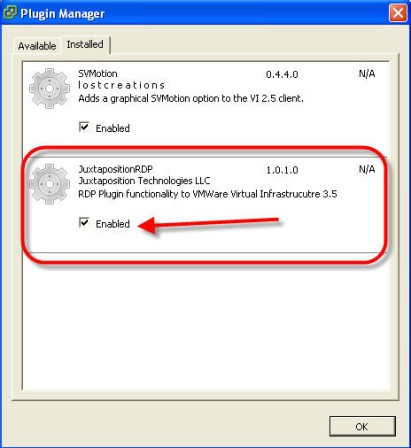 From there, I enabled the RDP plug-in, and clicked OK. At that point, I could go to any of my virtual guest machines that have RDP remote management enabled on them, right-click and click Open RDP Session. 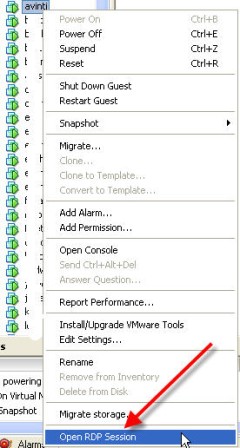 What that does is open a Microsoft Remote Desktop connection to that virtual guest machine, like this: 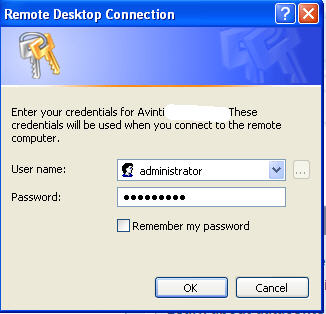 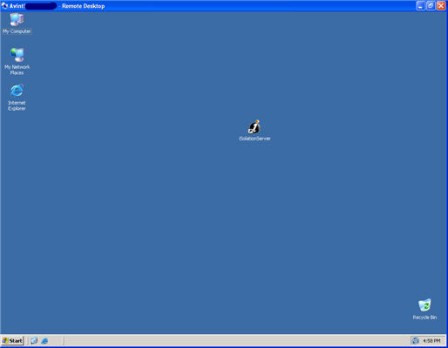 Andrew Kutz's Console plug-in has a very nice MSI installation that you are used to with most new applications. 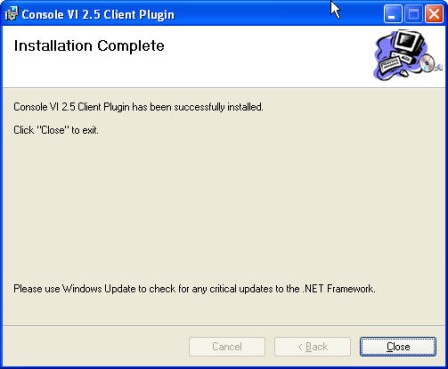 After the installation, you need to start your VI Client and, as with the RDP Plug-in, enable the Console Plug-in. 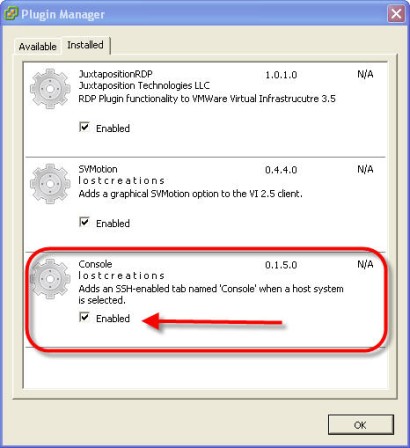 At this point, if you click on any physical ESX Server in your VI Client, you will see a new tab named Console. If you click on that tab, you can enter your username and password and click connect. What this will do is to create a SSH terminal connection from your PC to that ESX Server, directly from the VI Client interface. Here is what it looks like: 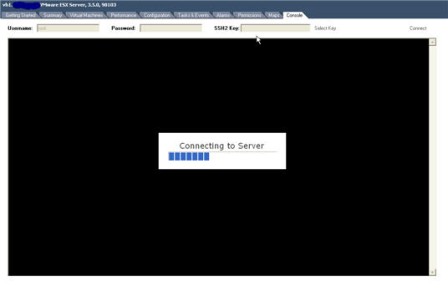 Creating your own VI plug-ins

While creating plug-ins for the VI Client requires some programming knowledge, it is much easier thanks to SVMotion plug-in developer Andrew Kutz. He also created the VMware Infrastructure 3.5 Plugin and Extension Programming Guide - Revision 1.3.

There are more plug-ins released all the time. Do you know of any new VI Client plug-ins? Let us know: [email protected] .

There are many other programming tools available for programming and interfacing with VMware ESX & the VI Client. They include: