Solutions provider takeaway: The PowerShell cmdlets provided in this section are valuable to solutions providers trying to get information on managing new virtual machines. You will find out how to automate the addition of a managed host to Virtual Machine Manager (VMM) without the use of credentials. This excerpt also details how to evacuate a host for maintenance mode and use rapid provisioning to create a virtual machine quickly.

Automating the Addition of Managed Hosts

Adding a virtual machine host to VMM requires administrative credentials for the physical computer. The requirement of credentials makes it hard to automate any tasks that need to run unattended without sacrificing the security of your credentials. Since the credentials are required parameters to the VMM cmdlets in the script and storing them in clear text might compromise security, you can save your credentials to a file for later use. See the following PowerShell cmdlets for an example:

When it is time to execute the automated task, you can retrieve this file from the same location and add a host to VMM. In the following code snippet, we are looking to add all Hyper-V hosts in the environment:

# The output of the discover-computer cmdlet can now be used to
# add these hosts to VMM
foreach ($computer in $Computers)
{
# Instead of prompting for credentials, $PSCredential_Out contains the values
# required by VMM to add a new host
Add-VMHost -Credential $PSCredential_Out -ComputerName $computer
}

Listing 8.7 shows how to get the next available MAC address from this range and how to commit the selection. Once the MAC address is committed, it will never be used again by VMM.

Listing 8.7: PowerShell script to retrieve the next available MAC address

#Now, let's save this MAC address and commit the change in VMM
$MacAddress = New-PhysicalAddress -Commit

# Once you have a MAC address, you can invoke the Set-VirtualNetworkAdapter
# cmdlet to set the MAC Address
# First, let's get the virtual network adapter for our Virtual Machine1
$vnic = get-virtualnetworkadapter -vm "

Evacuating a Host for Maintenance

It is sometimes necessary to service the physical computer running the virtualization software, resulting in several hours of downtime. We will show you a script that you can use to evacuate a host from all of its virtual machines instead of the virtual machines being inactive as well. Make sure you monitor the progress of the VMM jobs to ensure that all virtual machines have successfully migrated to a different host. Listing 8.8 contains the code for asynchronously moving all the VMs from a host.

When maintenance mode is stopped on a host, VMM will allow that host to be the target host of migrations and that host will start receiving a star rating in placement calculations. However, no VMs are restarted on that host, and the VMs that were migrated away from that host are not placed back automatically.

Listing 8.8: PowerShell script to asynchronously move all the VMs from a given host

# The script takes as input the VMM server name and
# the FQDN of the host to evacuate
$usage = "Usage: ScriptName.ps1
{
write-warning $usage; break
}
# helper function to move a VM to the host with the highest star rating
# This function could be easily modified to only move VMs within a
SAN or a cluster
function MoveVM($vmobj, $hostobj)
{
$hostrating = get-vmhostrating -vmhost $hostobj -vm $vmobj
$orderedrating = $hostrating | sort-object rating -descending
Write-Output $orderedrating

# Enumerate all VMs on this host and move them asynchronously
foreach ($VM in $VMHost.VMs)
{
MoveVM $VM $AllHosts
}

VMM 2008 R2 introduced a new feature called Rapid Provisioning. This feature was implemented in response to customer demand to improve the time required to create virtual machines. In VMM 2008, the only way to create and deploy a new virtual machine was by utilizing a template, another virtual machine, or a VHD from the VMM library. During the new virtual machine creation process, VMM copied all the required VHDs over the network using the BITS protocol. Depending on the size of VHD and the available bandwidth, this operation could take several minutes to complete.

Several customers have sophisticated SAN technologies that enable them to clone a LUN that contains the VHD and present it to the host. However, customers still want to leverage the VMM template capabilities with operating system (OS) customization. Rapid Provisioning allows you to take advantage of your fast SAN infrastructure to move (or copy) the actual VHD files to the host but tie that back to VMM's rich template customization process. With Rapid Provisioning, you can now create a template that includes the OS configuration and references a ''dummy'' blank VHD. The blank VHD will not be used and will be replaced through the Move-VirtualHardDisk cmdlet. This cmdlet will let VMM know that it should not be using the VHD that is referenced in the template. Instead, VMM should use a VHD that resides locally on the host computer. To indicate to VMM that Rapid Provisioning needs to be used, the New-VM cmdlet takes a new switch called UseLocalVirtualHardDisk. Rapid Provisioning is only available through Windows PowerShell cmdlets.

Listing 8.9 shows an example creation of a virtual machine by utilizing Rapid Provisioning. In this example, C:Win2k8_Base_OS_Sysprep.vhd has to locally exist on the host computer before the New-VM cmdlet is invoked.

# Start by specifying the file location for the VHD that will
# be used by the Virtual Machine
$VHDName = "c:Win2k8_Base_OS_Sysprep.vhd"

# Specify the local location for the VHD
# That will replace the "dummy" VHD that exists in the template
# VMM expects that $VHDName already exists on the host computer
# when the new-vm cmdlet is called.
Move-VirtualHardDisk -Bus 0 -LUN 0 -IDE -Path $VHDName -JobGroup $JobGuid

# Get the instance of the template that will be used for OS Configuration $template = Get-Template | where {$_.Name -eq "VMMTemplate"}

Even though Virtual Machine Manager does not provide UI support for creating a virtual machine using differencing VHD disks, this can be accomplished using Rapid Provisioning. Using the public Hyper-V WMI interface, you can create a differencing disk for the c:Win2k8_Base_OS_Sysprep.vhd VHD file used in Listing 8.9. Then, when the Move-VirtualHardDisk cmdlet is executed, you can pass the full path to the child VHD. The differencing disk will then be used as the target VHD for the new virtual machine creation.

In addition to the new UseLocalVirtualHardDisks, VMM 2008 R2 has added one more new switch for New-VM called SkipInstallVirtualizationGuestServices. This switch notifies VMM to skip the installation of the Integration Components (ICs) (also known as Virtual Guest Services) as part of the New-VM cmdlets, decreasing the amount of time required for New-VM to complete. This switch should be used only if you are already certain that your template either contains the ICs or contains an operating system that has built-in integration components. It is important that you ensure that all your VMs have the integration components correctly installed to take full advantage of virtualization and virtualization management. The SkipInstallVirtualizationGuestServices will take effect only in the following three New-VM scenarios:

The following code shows an example invocation of the New-VM cmdlet that utilizes this new switch. This new switch can also be used along with the UseLocalVirtualHardDisks switch to further speed up the New-VM process. Here's the code:

# Get the instance of the template that will be used for OS Configuration
$template = Get-Template | where {$_.Name -eq "VMMTemplate"}

The Virtual Machine Manager Administrator Console only exposes the Virtual Machine Priority setting as part of the virtual machine properties. The priority of a VM, which decides how to allocate CPU resources on the host for this VM, can be specified in the Hardware Configuration tab, as shown in Figure 8.15. VMM exposes two more CPU properties for a virtual machine through Windows PowerShell only and the Set-VM cmdlet:

CPUMax Specifies the highest percentage of the total resources of a single CPU on the host that can be used by a specific virtual machine at any given time.

A third PowerShell property, called RelativeWeight, is the same as the VM Priority property seen in Figure 8.15. Use this command to create a new hardware profile with the three CPU properties set at different levels. 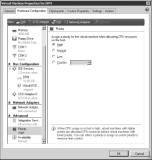 The following code shows an example creation of a virtual machine with the CPU properties:

# Get the instance of a host
$vmhost = get-vmhost "host.contoso.com"

Creating automated tasks that checks the health of your system and emails the administrator on critical errors can be accomplished very easily with a few cmdlets. In this section, we will show you a few cmdlets that can prove useful in assessing the overall health of your system. If you would like to bundle these scripts into an automated task and enable email notification, you can look into the SMTP emailing properties of the class System.Net.Mail.MailMessage.

Use this command to get the overall status of the virtual machines' health:

Use this command to get a list of all virtual machines and their host names:

Use this command to get a list of the last job run on each virtual machine:

Use this command to get the health information of the hosts:

Use this command to get the health information of the managed physical computers:

Use this command to create a report of two custom properties of a virtual machine:

Use this command to get the list of virtualization platforms in VMM:

Use this command to get the last 10 jobs that were run in VMM, their owners, and the affected objects:

When invoking Windows PowerShell cmdlets, it is useful to be able to identify if an error occurred. Use the following command to clear any existing errors in the error pipeline and then use the same object to check for errors:

# Clear any existing errors from the error pipeline
$Error.Clear()

# Check if any errors occurred
if ($Error.Count -ne 0)
{
# An error occurred here. Do something about it and terminate
# the script
}

Describe the main benefits that PowerShell offers for VMM. Windows PowerShell is a relatively new technology that was developed by Microsoft Corporation. Virtual Machine Manager utilized this technology as the scripting public API for VMM and as the backbone of the Administrator Console.

Master It What version of Windows PowerShell does VMM support?

Which are the VMM assemblies needed for programmatically integrating with VMM's cmdlets?

List the benefits that Windows PowerShell cmdlets offer as a public API.

Master It How can you create a scheduled task in Windows?

List an example PowerShell script that checks if any host is in an unhealthy state and needs an administrator to take a look at it.

Use the VMM PowerShell cmdlets. Understanding the usage, scope, and association of the different VMM cmdlets and PowerShell objects allows an administrator to effectively manage VMM through Windows PowerShell.

Master It How can you identify the proper parameters and syntax for the Add-VMHost cmdlet?

How can you add the VMM PowerShell snap-in programmatically to a PowerShell script? How does the Windows PowerShell pipeline work?