Our router expert continues his series on building a secure WLAN with a Linux base. This article covers standard interface configuration of the http proxy server.

To provide the network access and security functionality needed for our WLAN environment, the Web proxy server requires four IP network connections. These connections can be discrete, requiring one physical interface per network connection or over one or more physical interfaces using 802.1q VLAN interfaces. Linux, of course, can support both approaches. In order to sufficiently cover the commands, functionality and processes related to Linux networking, we are going to cover Linux networking in two sections. This month will cover "standard" interface configuration. Next month will cover IP routing and VLAN configuration. But before we dive into Linux networking, let's quickly review what our WLAN/LAN network configuration looks like and the access controls used to ensure security. 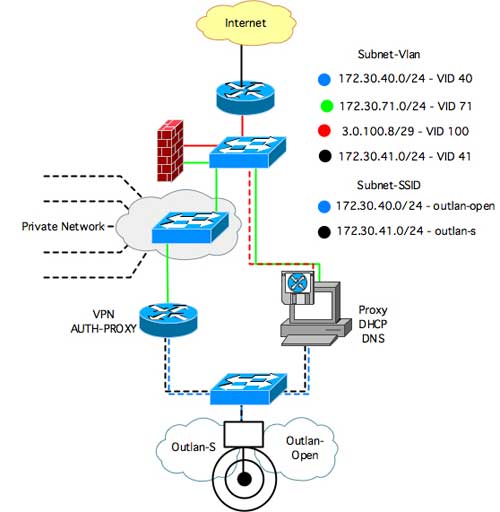 The WLAN is partitioned from the LAN using two devices. A Cisco IOS router provides filtered IPsec VPN client access to resources on the private data LAN. The WLAN proxy server provides proxied Web access, along with DHCP and DNS services for the WLAN segments. To ensure the security of the LAN, the WLAN is segmented into two discrete wireless segments. RF connectivity to these discrete segments can be provided by a single "smart" access point (AP) with support for multiple SSIDs and VLANs (such as a Cisco 1200) or by two "dumb" APs, each connected to one WLAN segment using two different RF channels. Using two SSIDs makes it possible to segment WLAN access into two service models. The SSID called "outlan-s" provides IPsec protected access to private LAN resources for known users. The SSID "outlan-open" provides secured Internet Web access to anonymous users.

The known users connecting to the SSID outlan-s require two predefined credentials in order to join the WLAN:

Once connected to the SSID outlan-s, users have access to the Web (via the proxy server) only. Additional access to resources on the private LAN requires two additional predefined credentials:

The users connecting to the SSID outlan-open have only one predefined credential requirement, which is a user account to connect to the Web proxy server. Once connected, they only have Web access. Now that we've reviewed, let's move on to Linux networking.

Of the two, /sbin/ethtool is the more feature-rich, while /sbin/mii-tool is the elder and more limited of the set. Both commands, however, are equally adequate to perform the basic Layer 2 configuration tasks.

To get an interface's current configuration status:

To get an interface's driver information (/sbin/ethtool only):

In the case of workstations, the final result of the Ethernet auto-negotiation is relative in terms of impact. In most cases, auto-negotiation will result in the most optimum rate for the transport environment. (This does not necessarily mean that the rate will be optimum for the user.) In the case of servers, however, leaving the network connection to chance is not the best approach. Server Layer 2 interfaces should be hard set to meet the performance and functionality needs of the server and its applications.

The importance of hard setting network speed and duplex options is far greater in Linux environments than in Windows environments. Because of the open-source basis for the platform, the quality of network drivers and the compatibility with auto-negotiation varies. The interface is intended to select the fastest mutually supported media technology, but in practice this does not always hold true. It should also be said that network hardware vendors have just as many problems with auto-negotiation. So the safest bet with servers is to hard set the values on the switch and host. That can be accomplished during the boot process with the addition of an rc script or at the command line once the server has completed the boot process.

When it comes to Layer 3 configuration, as is the case with Layer 2, there are two commands available:

The /sbin/ifconfig command is the de facto standard interface configuration command for Linux. The ifconfig command is used to enable or disable a kernel-resident network interfaces, as well as setting the interface's IP address and sundry information. The /sbin/ip command is a newcomer alternative to /sbin/ifconfig. Its support varies depending on Linux distribution. The /sbin/ip command not only supports IP interface configuration, but also supports Layer 2 configuration along with support for defining IP routing information. Think of it as the Superman of network configuration commands. As I said, support varies depending on distribution, but the source is also available on the Web. Here is the basic command syntax for configuring IP using /sbin/ifconfig and /sbin/ip:

To see the interfaces known to the kernel:

To see information on active interfaces: To configure host interface IP address: To bring up an interface: To bring down an interface: To set the maximum transmission unit on an interface, add: Once a Linux server has an active IP interface (on a server with only one interface), all that remains to be configured is the IP default gateway (DG). The DG is set using the /sbin/route or /sbin/ip route command using the following syntax: Once the DG is configured, the server can reach hosts outside of its local IP subnet. At this point, we have reviewed all of the commands needed to configure the proxy server's network interfaces from a command shell or using a shell script. 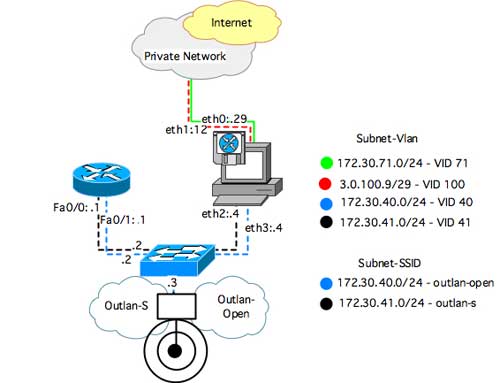 To configure the proxy server's interfaces, each 100 Mbps full duplex addressed for the network topology above the configuration script would look something like this:

Granted, this is a primitive example with no error checking, but it would configure all the needed interfaces, assuming the kernel loaded the drivers for them during boot. And it is this same approach, using the same commands, that the Linux boot scripts use to configure the server's network interface parameters during the boot process. The scripts that manage and configure the server's network interfaces are quite involved, but very flexible. Before we get into their mechanics, we need to review the Unix/Linux boot process.

The Unix/Linux systems employ a three-stage (OK, it's really two-stages, because the hardware BIOS is separate from the operating system load) bootstrap process. Starting from a power-off or "halted" state:

There are seven Unix run modes (this is an approximation of the various Unix/Linux flavors):

The operational "run" level that the system "boots to" is set in the /etc/inittab configuration file. Each of the system "run levels" is achieved by the kernel loading a set of system configuration scripts that set the various run aspects of the server. The run-level scripts are located in the /etc/rc.d directory. Within /etc/rc.d are directories for each of the run levels rc0.d thru rc6.d, and within each of these directories are the actual load scripts (that are links to actual scripts located in /etc/init.d). Along with the run level script directories are the following:

Now, the reason for this exploration of the Linux boot process is the fact that the network configuration is part of the run-level initialization process. By default, the run-level script /etc/rc.d/rc3.d/S10network configures the server's network interfaces based on the configuration files located in /etc/sysconfig and /etc/sysconfig/network scripts. To be perfectly honest, there is an enormous amount of complexity here for bringing up a few router interfaces, but that is the price we pay for simplicity in the end. Let's dive in and take a look.

The simplest way to bring all of the interfaces up or down once the system is booted is to run the rc S10Network script:

An /etc/sysconfig/network-scripts/ifcfg-eth* file exists for each interface that the kernel manages during the boot process. Each configuration script has three required values and a number of relative options, depending on the required value settings:

Next time we will pick up with the options available for defining IP routing information. In the meantime, if you have questions, comments, or article suggestions, please e-mail us.