Unshielded Twisted Pair (UTP) is a cable that has four pairs of wires twisted inside it to eliminate electrical interference. UTP cables are connected using RJ-45 connectors that have eight connector pins. The data equipment that is used for internetworking is classified as Data Terminal Equipment (DTE e.g. router interfaces) and Data Communication Equipment (DCE e.g. A WAN connects DTEs through DCE network).

UTP cables are used in many configurations and for different purposes, to form an internetwork including:

Applications of UTP include:

These configurations and applications are discussed below.

A straight-through cable is the standard network cable connection and is used to connect the source and destination computers through an internetworking device. Specifically, you can use it to connect a host to a hub or switch

In a crossover cable, the standard RJ-45 cable between the source and destination computers is cross-connected. A crossover cable can be used to connect:

These Cisco proprietary cables used to connect to a router or switch console port. In a rollover cable (8 pins), RJ-45 connectors are usually present at each ends and are used to connect router and computer ports. Pin 1 on one end of cable connects to Pin 8 at the other end of the cable, similarly, Pin 2 connects Pin 7, and so on.

All WANs use serial transmission, which can pass one bit at a time over a single channel. Cisco provides a 60-pin serial connector for one end of the cable while other end of the cable may be EIA/TIA-232, V.35, EIA/TIA-449, X.21 or others;

ISDN refers to a collection of standards that define a digital architecture that can carry integrated voice and data, using the public-switched network. ISDN BRI (Basic Rate Interface) is a two 64 kbps Bearer channels (2B) plus one 16 kbps Data channel (D) service. ISDN BRI terminates at the customer premise with the U interface.

A console is a type of DTE through which commands are entered into the host device. Most Cisco devices support the RJ-45 console connection. A rollover cable with an RJ-45 connector is used to connect the PC or terminal to the console port of the Cisco device.

In the fixed interface series, you refer to the interfaces as:
interface_type interface_number

To practice such commands you can download a free CCNA router simulator from SemSim.com and proceed to the troubleshooting 1 exercise that configures ethernet 0 interface. 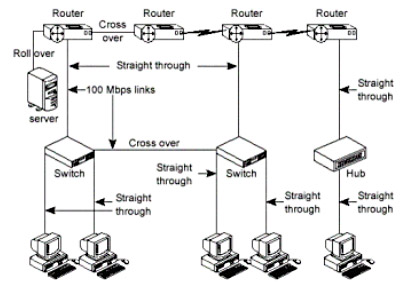