SAN FRANCISCO – Oracle executives showed a demo of the long-awaited and long-delayed Oracle Fusion Applications during the company’s last keynote on Wednesday.

The demo took place at the end of the keynote, during which Oracle CEO Larry Ellison gave a largely repeat presentation from his keynote on Sunday. During Wednesday’s talk, however, Ellison said that Fusion Applications is “the largest engineering project in Oracle’s history.”

Read how Ellison named the first Oracle Fusion Applications … in 2007.

“We’ve been working on building Fusion Applications for a very long time,” he said. “More than five years.”

Customers, analysts and partners shared their thoughts on the forthcoming applications. For example, Michael Macrie, CIO of Ingersoll-Rand, said: “The Fusion approach allows us to integrate companies as we acquire them.” Another, Qualcomm CIO Norm Fjeldheim, said that Fusion will be a “foundational platform to deal with all these changes [in telecommunications].”

As for when that next generation will arrive, end users will have to wait a little longer. Ellison said the Oracle Fusion Applications suite wouldn’t be generally available until the first quarter of next year.

Much of the rest of Ellison’s keynote was a repeat of his talk on Sunday, emphasizing Exalogic and Exadata 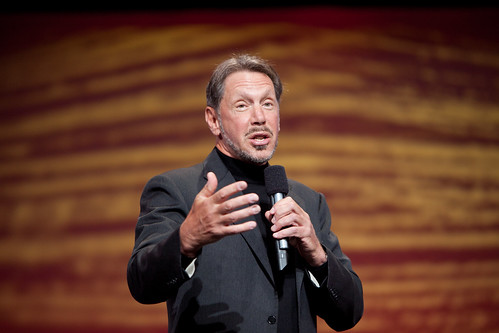 “We believe that if you engineer the hardware and software pieces to work together, you get a much better system,” he said. But he didn’t address the flipside, which is lock-in with a vendor like Oracle.

Ellison also took some time to reply to Salesforce.com CEO Marc Benioff’s recent comments that “clouds are not in a box.”

Kenneth Timque, assistant vice president of dataset engineering at New York Life, said he enjoyed Ellison’s keynote. He missed Ellison’s talk on Sunday, and so he didn’t care that Wednesday was something of a repeat performance.

“He was at his best,” Timque said. “He got some good digs into his competitors, as usual.”

He added that New York Life will “definitely take a look” at the integrated hardware and software that comes with Exadata and Exalogic, though the company has no immediate plans to buy anything.

Mark Fontecchio can be reached at [email protected].