To install Ubuntu permanently on your PC, you'll need to have a hard disk area set up for it. There are three common options for this setup:

Obviously, the easiest solution for installing Ubuntu on a PC is to replace the existing operating system installed on the hard drive. The Ubuntu installation easily guides you through this process. Just remember that when you're done, you won't have the original files from your previous operating system. If you want to keep any files, you'll need to back them up yourself to media that you can read from Ubuntu.

Laptops often pose a problem for Linux distributions. Many older laptops use proprietary hardware devices that aren't supported by Linux. On some of these laptops, Ubuntu may not even be able to run the LiveCD. Older laptops with proprietary video systems are especially prone to fail in the Linux environment. However, most newer laptops use more standard hardware that Ubuntu can detect and use without any problems. Pay special attention to the video, modem, and wireless network cards used in your laptop because these devices cause the most problems. A great resource for working with Linux and laptops is www.linux-laptop.net. It provides valuable guidance from users who've success-fully loaded specific Linux distributions on specific laptops. If you're purchasing a new laptop, you should check it for Ubuntu compatibility, either by booting it using the Ubuntu LiveCD or by verifying its hardware on the various Ubuntu and Linux hardware web sites. With the popularity of virtual server programs such as VMWare and Sun VirtualBox, many Linux enthusiasts load Ubuntu within a virtual environment running inside a Windows operating system. If you're trying to do that, just follow the Ubuntu installation method to replace the existing operating system on the hard drive. Just make sure that you're inside your virtual server environment before doing that!

You'll need to take some special precautions when setting up your workstation in a dual-boot environment. This section walks through some of the things to watch for in each of these two scenarios.

The most common disk controller used in workstation PCs is the integrated device electronics (IDE) controller. The IDE controller allows up to two devices per channel. Workstations often will have more than one IDE channel installed on the motherboard.

The serial advanced technology attachment (SATA) controller is a technology that's becoming more popular in newer PCs. This technology emulates an IDE controller but with much faster response times. Ubuntu has full support for SATA devices, so you can easily use them for your Ubuntu installation.

Usually you can determine your disk controller configuration by looking at the BIOS setup screen for your PC. Figure 3-2 shows an example of the disk controller area on a BIOS screen. 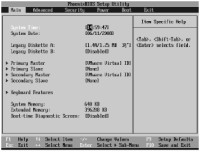 This example shows two controllers (a primary and a secondary), with each supporting two devices (a master and a slave). This configuration allows you to connect a total of four separate devices to the workstation. Besides the hard drive, IDE controllers also support connecting CD/DVD devices, so you'll need to be careful when evaluating your disk controller situation.

If both of the disk controllers already contain one device, you'll need to use a master/slave configuration to add the second hard drive. This process requires a controller cable that has three plugs -- one for connecting to the motherboard and two connectors to plug devices into.

There are several formats of RAID support:

RAID1 is common when only two hard drives are present. One hard drive is the primary, and the other is a hot backup. The disk controller performs all disk write requests from the operating system on both hard drives. RAID3 and RAID5 are the most popular methods of RAID disk support and usually require three or more hard drives. Both of these methods can recover data from a complete failure of any one disk in the system.

Despite the "inexpensive" part of its name, RAID technology can be expensive, and it is used primarily for high-availability server environments. The Ubuntu server installation can detect and use most SCSI controllers and RAID configurations.

The Windows Computer Manager provides a graphical tool for looking at the hard drives installed on your workstation. This tool is available in Windows 2000 Workstation, XP, and Vista. You can get to it by following these steps:

The Disk Management tool displays all of the hard drives recognized by Windows and shows whether they are formatted and used. Each hard drive appears as a separate line in the list and is shown with the partitions and format types identified.

Many newer workstations utilize a hidden partition to store important recovery information. A hidden partition is a section of the hard drive that's partitioned, but not assigned a drive letter, by the operating system. Even if you see only a C: drive on your Windows setup, your hard drive may still contain two partitions, as shown in the example in Figure 3-3. The hidden partition can't be used for Ubuntu, or you'll lose the ability to restore your Windows system if it crashes.

If you see only a single partition that's allocated for Windows on your hard drive, you'll need to continue with the partitioning process to free up space for Ubuntu.

The next step in the partition process is to determine how much free space you have on your existing hard drive. Remember, you'll need at least 4 GB of free space for Ubuntu, plus you'll probably want to keep some extra free space for the original operating system.

To find out how much free space is available on your Windows partition, you can turn again to the Windows Computer Management tool. The top portion of the Disk Management window shows detailed statistics for each hard drive partition.

Once you've determined the amount of space you have available for Ubuntu, the next step is to ensure that the space on the disk is really empty.

During the normal course of using your workstation, Windows tends to write files at random places on the hard drive. This can spread data over the entire disk space area. When you split the hard drive into partitions, you'll want to ensure that you don't lose any of the data used in the Windows system, including system and data files.

To make a clean partition of the hard drive, you'll need to make sure that all of the Windows data are moved toward one end of the hard drive. This process is commonly done with a defragmenting tool.

Defragmenting is a common process in the Windows world. It's the process of realigning how files are stored on the hard drive. As Windows creates and removes files, file data get split into various blocks scattered around the hard drive. Defragmenting reassembles all of the blocks for each file into a contiguous area near the beginning of the hard drive.

All versions of Windows include a utility for defragmenting the hard drive. You can get to the defragment utility from the Computer Management window. Just select the Disk Defragmenter option.

Often it takes more than one pass to get all of the files into a common area. After defragmenting moves the files to a contiguous area at the beginning of the disk space, you're ready to partition the hard drive as part of the Ubuntu installation.

Read the rest of this chapter excerpt.