Editor's note: This is the second article in a two-part series on Hyper-V networking. The first article focuses on the virtual switches in a Hyper-V network, while this piece examines the use of Hyper-V logical networks.

There are two main problems with legacy Hyper-V virtual networks. The first is scalability. Hyper-V Manager is designed to be a server-level management tool. When you create an external virtual switch for instance, that virtual switch is bound to a physical network adapter on that server. That causes problems for a live migration. If you move a virtual machine to another host, the secondary host will require an identical virtual switch. Otherwise, the virtual machine will lose connectivity.

Building matching virtual switches on each Hyper-V host is a tedious process if you have more than a handful of hosts. This can be especially true when you consider that a single Hyper-V cluster can consist of up to 63 servers.

The other problem with legacy Hyper-V virtual networks is that they do not work very well for multi-tenant environments. While it is possible to build secure, multi-tenant virtual networks through the use of virtual LANs, there are scalability issues that are compounded as the number of Hyper-V hosts increases.

Microsoft's next-generation solution to these problems involves the use of logical networks and logical switches. Logical networks are a mechanism for abstracting your physical network by grouping VLANs and subnets into named objects that can be assigned to host groups.

How to define switches for logical networks 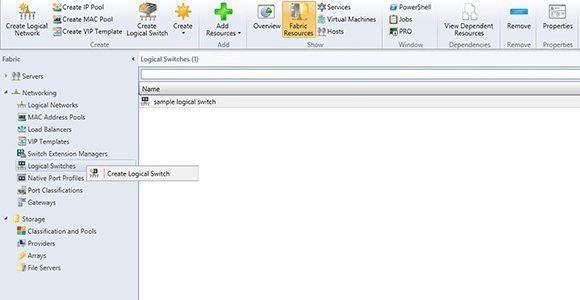 Right-click on the "logical switches" container and select the "create logical switch" command from the shortcut menu.

The last step is to link a logical switch to the physical network adapter on a Hyper-V host. To do so, go to the "VMs and services" workspace within the System Center Virtual Machine Manager console. Then right-click on a host, and select the "properties" command from the shortcut menu. When the host's properties sheet appears, select the "virtual switches" tab and then click "new virtual switch."

Upon doing so, you will be given the choice of creating a new standard switch or a new logical switch, as shown in Figure C. Standard switches are identical to the virtual switches that can be created through the Hyper-V Manager. Choosing the logical switch option allows you to bind a physical network adapter to a previously defined logical switch. 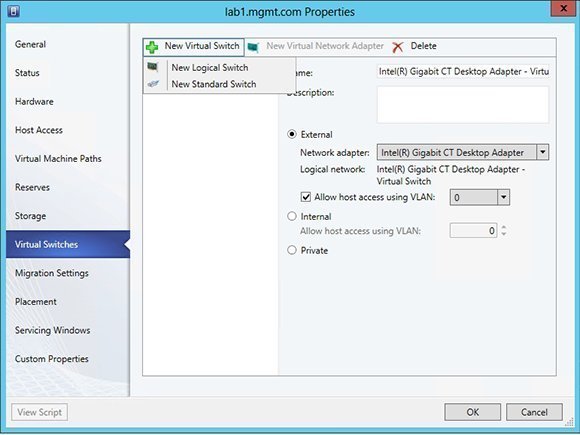 Building a logical network and setting up logical switches involves a lot more work than using a standard Hyper-V switch. So why go through all of this effort?

More on networking for virtualization

Are NVGRE and VXLAN the answer to VLAN shortages in the cloud?

Because of the way that components are reused, it becomes possible to ensure that Hyper-V hosts use a standardized network configuration. There is even a way to detect host servers that have deviated from the approved networking configuration and to perform remediation.

The use of logical networks is also important for multi-tenant environments because it allows key components to be reused. You won't have to reinvent the wheel each time you have to create a new tenant network. You can simply reuse existing components.

About the author:
Brien Posey is a seven-time Microsoft MVP with two decades of IT experience. Before becoming a freelance technical writer, Brien worked as a CIO for a national chain of hospitals and healthcare facilities. He has also served as a network administrator for some of the nation's largest insurance companies and for the Department of Defense at Fort Knox.