By
Although plug-and-play technology has become fairly reliable as it has matured, in some cases, it still doesn't work perfectly. For example, to this day there are still system boards that contain ISA expansion slots, which allow modern PCs to use legacy devices. Sometimes ISA-based devices can interfere with PCI devices.

Likewise, some x86 system boards use IRQ sharing across two or more PCI slots. Most of the time this arrangement works well, but sometimes conflicts do occur.

If you don't happen to have an ACPI-based system, or a system that allows you to toggle between ACPI and non-ACPI modes, then you may be able to resolve hardware conflicts by manually reallocating hardware resources.

Before you begin – be forewarned

The technique I am about to show you is very similar to a resource allocation technique that used to be common for systems running Windows 95, Windows 98 and Windows ME. While you can generally use this technique without consequence in a Windows 9x or a Windows ME environment, Windows XP is a much more sophisticated operating system. Depending on the change you make, it is possible that you will receive a Blue Screen of Death, citing a STOP: 0x00000079 error.

When this error occurs, it is because the HAL (hardware abstraction layer) no longer matches the machine's hardware configuration. If this happens, you will have to perform a clean Windows installation (an upgrade won't work).

My point is that the following technique should allow you to resolve any hardware resource conflicts, but you must be prepared to install Windows from scratch if necessary.

Generally speaking, you must ensure that each hardware device has both a unique IRQ and memory range. If a hardware device uses a DMA, then that should be unique as well.

Note: As I mentioned earlier, most modern systems are designed to use IRQ sharing, but if you are reading this, then I'm assuming that IRQ sharing isn't working for one reason or another.

When resource conflicts occur, typically either one or both of the conflicting devices won't work. That being the case, your goal is to eliminate the conflict so that both devices can work. Incidentally, if you don't need both devices, then you can save yourself a whole lot of effort by simply disabling or removing the device that you don't need. To disable a device, simply right click on it in the Device Manager, and select the Disable command from the resulting shortcut menu. When you do, the device will be flagged with a red X, as shown in Figure A. 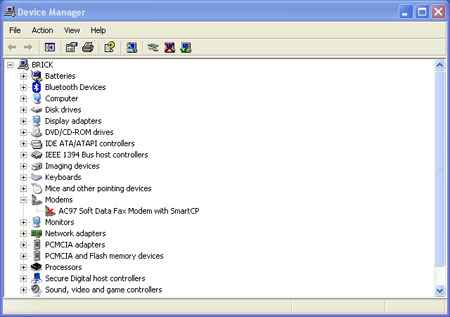 As you can see in Figure B, the Resources tab lists the memory range and the IRQ that the device is using. If the device were using a DMA, that would be listed as well. 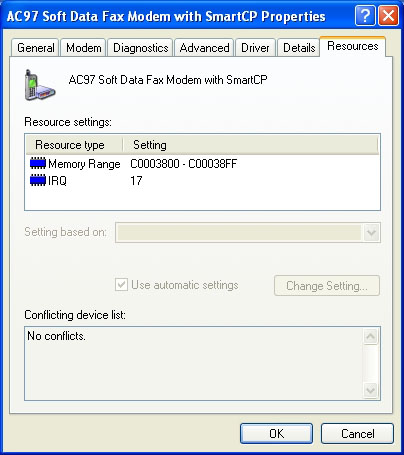 At this point, you must deselect the Use Automatic Settings check box. If this check box is not available, then your system probably uses the ACPI HAL, which ignores IRQ assignments that are stored in the firmware.

Now, select the resource that you want to reassign and click the Change Setting button. You will now have the opportunity to assign a different set of resources to the device. Notice the Device Conflict List at the bottom of Figure B. Windows compares the currently selected resources with those used by other devices and lists any conflicts. If any conflicts are listed, then you must choose different resources.

Once you have resolved the conflict, click OK and hope for the best. If you receive a STOP: 0x00000079 error, then it's time to reinstall Windows. Remember, this must be a clean install, not an upgrade.