A while ago, I had a problem with my in-house router, so I turned off the wireless function and was using the router in wired mode only. The router was near the end of its life, and the radio component was dying. I attempted to cobble together a system where one of my notebooks served as a kind of wireless router, but it didn’t work very well.

I’ve since found a couple of much easier ways to convert a Windows 7 notebook into a wireless hotspot and share an Internet connection without a lot of hassle. No programming or even networking expertise is needed for the most part. All that’s required is an application -- as it turns out, there’s more than one app that does the job. 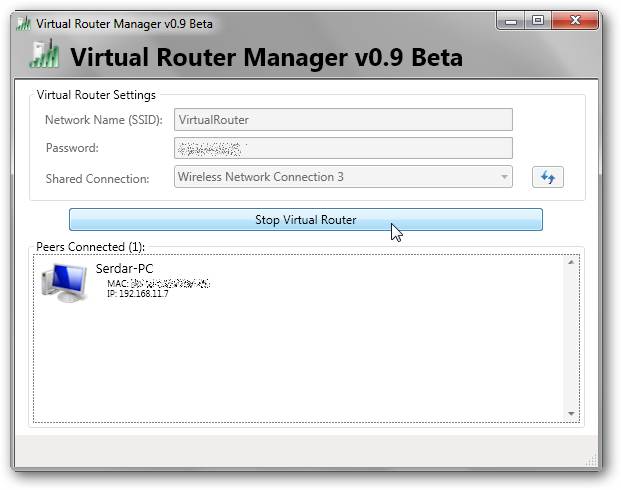 The first is Virtual Router, an open source project hosted by CodePlex. This one seems to be the most straightforward and simple. Just run the software, pick a network connection to share, and set an access password. The connections are secured via WPA2 encryption, and a list of all connected clients can be viewed right in the program’s main window.

The program has a few downsides, however. Encryption is required for Virtual Router connections, so any devices that don’t support WPA2 will not be able to connect. For instance, my first-generation PSP would have been a no-go. Also, based on user feedback, not all network chipsets are supported, and the programmers have kept some documentation about which network devices don’t work. Virtual Router only works with Windows 7 and Windows Server 2008 R2 because it relies on networking extensions only available in those operating systems. Finally, the program itself hasn’t been updated since the end of 2009, although it works reliably enough as is.

MyRouter is another simple open source application from CodePlex. Once installed, run the software, specify a network name and password, and choose an interface to share. Like Virtual Router, MyRouter uses WPA2 authentication for clients, it also requires Windows 7 or Windows Server 2008 R2 to run, and it may not work with some network chipsets. One major advantage of MyRouter over Virtual Router is support for port forwarding, which seems to be flaky as of the first revision of the program. 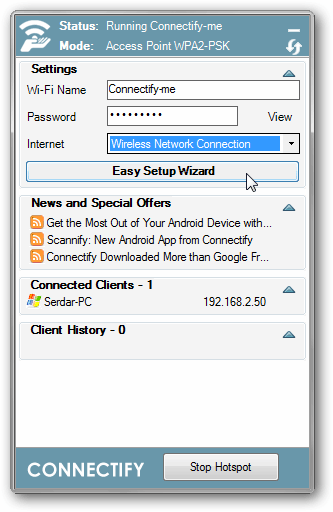 Lastly, Connectify, a free commercial application, is the most professional looking program of the three -- although it’s not an open source tool. After installation, Connectify displays a sleek-looking wizard, which presents the setup process. It also has an informative pop-up window with all the program’s main settings. Turning a hotspot on and off is as easy as clicking a button, and there’s even a running list of all the clients that are connected to the hotspot. Those who don’t mind using a commercial application can start here.

Before installing any software, be sure to look at the terms of service for some Internet connections, such as the pay-as-you-go variety found in hotels and airports, because they may explicitly forbid tethering or sharing in this fashion.

ABOUT THE AUTHOR
Serdar Yegulalp has been writing about personal computing and IT for more than 15 years for a variety of publications, including (among others) Windows Magazine, InformationWeek and the TechTarget family of sites.