A virtualization architecture is a conceptual model specifying the arrangement and interrelationships of the particular components involved in delivering a virtual -- rather than physical -- version of something, such as an operating system (OS), a server, a storage device or network resources.

The image below illustrates the difference between traditional computing architecture and a virtualization architecture. 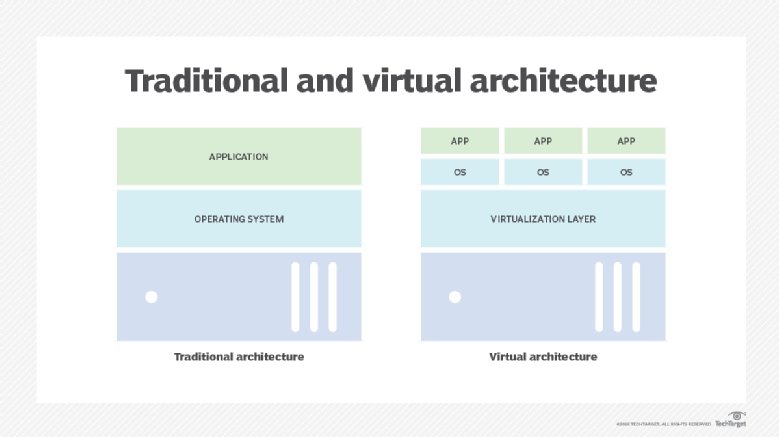 Virtualization is commonly hypervisor-based. The hypervisor  isolates operating systems and applications from the underlying computer hardware so the host machine can run multiple virtual machines (VM) as guests that share the system's physical compute resources, such as processor cycles, memory space, network bandwidth and so on.

A type 2 hypervisor, also known as a hosted hypervisor, is installed on top of the host operating system, rather than sitting directly on top of the hardware as the type 1 hypervisor does. Each guest OS or VM runs above the hypervisor. The convenience of a known host OS can ease system configuration and management tasks. However, the addition of a host OS layer can potentially limit performance and expose possible OS security flaws. Examples of type 2 hypervisors include VMware Workstation, Virtual PC and Oracle VM VirtualBox.