Electrical pollution is electromagnetic-field (or EM-field) energy emanating from electrical wiring. In most places, the majority of this energy exists at 60 Hz (hertz), resulting from the AC (alternating current) that constantly flows in the utility wiring outdoors, indoors, and inside common appliances.

Not all of the energy in utility electricity occurs at the standard AC frequency of 60 Hz (50 Hz in some locations). Emissions also take place at various other frequencies. These emissions, sometimes called dirty electricity, result from the use of appliances that generate irregular waveforms and transmit the resulting currents into the utility wiring. Vacuum cleaners, hair dryers, fluorescent lamps, and some consumer electronic devices produce this type of energy.

Various software can produce a spectral display of electrical pollution on just about any computer. The EM energy appears and fluctuates in frequency as you turn on, for example, a big vacuum cleaner.

Here's a screenshot of a spectral display of dirty electricity using a program called HamScope: 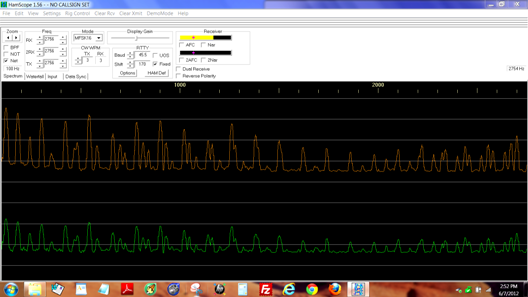 Watch a video that explains how to test your home for dirty electricity:

Customer intelligence (CI) is the process of collecting and analyzing detailed customer data from internal and external sources to gain insights about customer needs, motivations and behaviors.